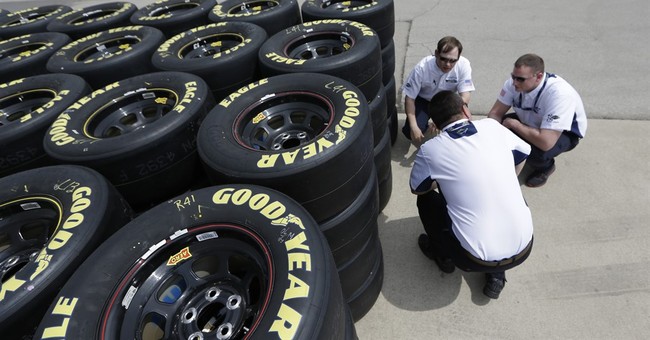 President Trump continued his opposition to the Goodyear Tire & Rubber company after it was revealed that they allegedly implemented policies that are discriminatory towards conservatives. On Wednesday, he called for a boycott of the organization for banning phrases and attire that promote conservative ideas while accepting those that push leftist views.

The president told reporters that he would replace the Goodyear tires on the presidential limousine. “I would swap them out based on what I heard,” he said, referencing the bulletproof tires on the vehicle, which is also known as “The Beast.” He added, “We’ll see what happens.”

The company sparked a controversy after an employee leaked a screenshot of a slide used in a presentation on diversity that was allegedly circulated by its headquarters. The slide indicated that phrases like “All Lives Matter,” “Blue Lives Matter,” and MAGA attire were not considered to be appropriate for the workplace. However, the slide also stated that “Black Lives Matter,” and material promoting the LGBT community was allowed.

This statement contradicts the claims of the employee who leaked the screenshot, who told reporters that the slide was part of a presentation that was sent from Goodyear’s corporate headquarters in Akron, OH. After the image surfaced, the company’s shares dropped by about 6%.

Former Vice President Joe Biden, who is challenging Trump for the presidency, slammed the president, accusing him of placing his grievances above Goodyear’s employees. “Goodyear employs thousands of American workers, including in Ohio where it is headquartered,” Biden said in a statement. “To President Trump, those workers and their jobs aren’t a source of pride, just collateral damage in yet another one of his political attacks.”

This story is yet another part of the overall debate over censorship and cancel culture. Some have called out the president for criticizing cancel culture while calling for boycotts. The point is valid. But at this point, what choice do conservatives have?

We have already seen the far left is more than willing to use cancel culture and boycotts to target those with whom they disagree. In fact, in some cases, they’ve even wielded this cultural cudgel against their own. But their primary targets are individuals and entities on the right, who refuse to abide by the precepts of wokeism.

From where I sit, there are only two choices: Sit back and hope this societal trend dies off after enough people get sick of it, or make them feel the heat for a change. While boycotts are typically not very effective in most cases, I see no problem with people using their wallets to make a statement; it is another form of speech.

While I am not a fan of the president using his office to push for this type of action against a private company, it’s apparent that if he had a “D” next to his name, the usual critics would remain silent. But the fact remains that conservatives buy tires too. The company has a right to impose any policy it sees fit, but consumers also have the right to choose which organization to do business with.

However, if we are going to take this route, it’s important that we make sure that we’re not decrying cancel culture by applying the label to every situation. When someone digs up ten-year-old tweets and uses it to destroy someone, that’s cancel culture.

But when consumers refuse to give their business to a company that is actively engaging in conduct with which they disagree, that is not cancel culture. There is a difference, and this distinction is important.