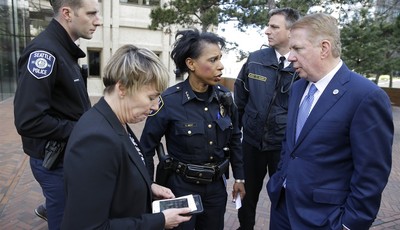 Seattle Police Chief Carmen Best has been through the wringer with the city council and the movement to defund the city’s law enforcement agency. Now, it seems she is fighting for the very survival of her department as progressives continue to target officers.

Last month, the Seattle city council passed a measure banning police from using blast balls, pepper spray, and other tools to quell riots and defend themselves. On Thursday, a federal judge temporarily blocked the ordinance from taking effect. Best penned a letter to the legislative body, which also wishes to cut the department’s budget by 50 percent.

“It is a fact that there are groups and individuals who are intent on destruction in our City. Yes, we also have seen weeks of peaceful demonstrations, but two recent events (Sunday, July 19th and Wednesday, July 22nd) have included wide-scale property destruction and attacks on officers, injuring more than a dozen, some significantly,” she wrote.

She continued, noting that the planned protests will likely result in the same type of violence. “This weekend we know that several events are planned across the city that will foreseeably involve many of the same violent actors from recent days,” she elaborated. “There is no reason not to assume we will continue to experience property destruction, arson, looting, and attempts to injure additional officers throughout the weekend and beyond.”

Best then indicated that she was not willing to place her officers in danger if they do not possess the tools necessary to defend themselves. “Under these circumstances, as created by Council, we cannot manage demonstrations as we have in the past,” she wrote. “If I am not allowed to lawfully equip officers with the tools they have been trained to use to protect the community and themselves, it would be reckless to have them confront this level of violence under the current legal restrictions imposed by Council.”

The police chief then explained how this measure could further place officers in danger. “As City Council’s legislation goes into effect, it will create even more dangerous circumstances for our officers to intervene using what they have left — riot shields and riot batons,” she argued.

After the killing of George Floyd, Breonna Taylor, and Ahmaud Arbery, both violent and peaceful protests have been staged across the nation. But the most violent demonstrations have occurred in cities like Seattle, where left-leaning activists set up their own autonomous zone, shutting down businesses and restricting travel. After two people were murdered in the area, police were finally allowed to shut it down.

Even after the numerous fatalities that have occurred because of the riots, progressives are still pretending that it’s the police that is the problem. They are essentially using the actions of Derek Chauvin, the officer who killed Floyd, to smear all police. And yet, they conveniently overlook the fact that by rendering law enforcement impotent, they are endangering the lives claim to be protecting.

But the motivation behind the movement to defund, or abolish, law enforcement agencies is apparent to those who are paying attention. It has already been established that most of the Black Lives Matter protests are being carried out by predominantly white activists. The national BLM movement is funded, and thereby run, by white progressives. Put simply, BLM has become a white Marxist movement with a black face.

Will those in Seattle who are pushing to disarm and defund the police actually reap the consequences of such a measure? Or will they sit, protected in their posh homes, and watch the inevitable carnage resulting from their actions on CNN? The latter is obviously true.

In reality, it is black people who will suffer from stripping police of their ability to defend themselves and others. Most black Americans agree that police are necessary, but they also believe that serious reforms are needed. Unfortunately, the effort to defund the police is a well-timed distraction from the main issue, which means that real change is not likely, which is precisely what the Marxist crowd wants.