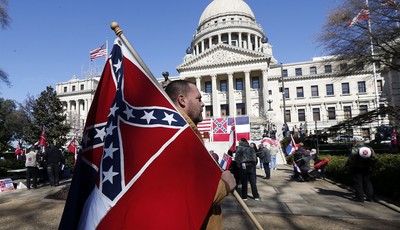 Mississippi’s state legislature recently voted to start the process of removing the Confederate symbol from its state flag. The vote comes amid heightened racial tensions and nationwide protests against police brutality. The decision was met with applause from those in attendance.

Sen. Briggs Hopson lauded the vote, saying, “Today, you — Mississippi — have a date with destiny.”

GOP Rep. Jason White declared that “The eyes of the state, the nation and indeed the world are on this House.”

The killing of George Floyd in Minneapolis did not only start a national conversation on police brutality; it also prompted discourse on a variety of other issues involving race. The Confederate flag and its emblem have also become the subject of debate. In fact, this issue played a part in the recent Bubba Wallace fiasco.

While far-left groups like Antifa are intent on pulling down statues, sane people on both the left and the right are debating Confederate symbols. This debate has now reached Mississippi, which is the only state that has not removed the stars and bars from its flag.

The rebel symbolism has been the subject of controversy for decades. However, Republican Gov. Tate Reeves indicated on Saturday that he would be willing to sign legislation that would alter the flag if the GOP-controlled legislature were to pass a bill to this effect.

Reeves pointed out that “The argument over the 1894 flag has become as divisive as the flag itself, and it’s time to end it.”

It would take a bill to remove the current flag from state law. A commission would be appointed to design a new banner that does not include the Confederate battle emblem. However, the new flag would have to include the phrase, “In God We Trust.”

The new flag design would be on the ballot in November and would become the official state flag if voters approve the new design. But if the majority votes against the flag, the commission will design a new one.

It might be tempting to view the vote of the Republican-led legislature as an acquiescence to the left. Some have accused them of cowardice. But removing this emblem from the symbol that represents the state should have nothing to do with left vs. right. There is nothing wrong with getting rid of an image that symbolizes one of the worst atrocities in America’s history.

The bottom line is that Republicans and conservatives must stop allowing the left to control the conversation on race. Because of progressives’ incessant race-baiting, many on the right have shied away from these discussions, some even adopting the flawed notion that racism is no longer an issue. But this has only allowed the left to get stronger and dominate the narrative.

People on the right can oppose racism and other forms of bigotry without turning into rabid SJW’s. In fact, a rational conversation on race would be much more desirable than the hysterical race-baiting we find on the left, wouldn’t it?

The fact that these conservative lawmakers made this decision is a positive sign. Perhaps now, more on the right can create their own conversation on racial matters instead of merely reacting to the latest display of leftist delirium. After all, we can’t push back against them if we’re always on defense, right?