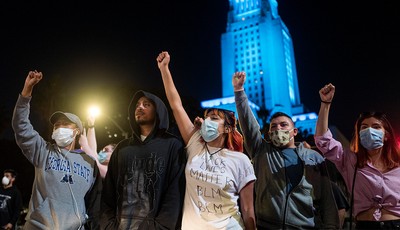 A video showing white #BlackLivesMatter protesters in Austin assaulting a black police officer recently went viral on social media. The group was staging a demonstration at the Texas State Capitol building to protest the killing of George Floyd, a black man who was killed by a Minneapolis police officer.

Austin is one of the many US cities that has seen violent riots and protests in response to Floyd’s death. Black residents and white Antifa operatives have used the tragedy as an opportunity to engage in looting and the destroying of public and private property.

The video shows a group of white protesters at the capitol surrounding and assaulting a black police officer, trying to grab a backpack that he was carrying. The scuffle concludes with the officer walking away with the backpack as the protesters hurled invectives at him. One shouted, “get out of here n*gga!”

As you already know, this story will not make national news; It likely won’t even register at the local level. But this encounter further reveals the reality: The far left cares nothing for black lives. They are not at all concerned about the state’s treatment of Floyd and other individuals who have suffered the same type of tyranny.

For the far left, this story just provided an opportunity to virtue signal and pursue their Marxist agenda under the guise of caring about black lives. Their allies in the corporate media are aiding their efforts by refusing to draw attention to their antics.

Indeed, it took them almost one week to finally admit that there were progressive agitators inciting violence. They even attempted to convince the American public that Antifa’s conduct was actually that of white nationalists who showed up in these cities.

It is the corporate press’ deliberate attempt to cover for Antifa, Black Lives Matter, and other bad actors that has allowed them to commit these acts with impunity. Attorney General William Barr confirmed that Antifa has been involved in instigating riots. Instead of condemning the actions of these individuals, the progressive left is more concerned with defunding the police.

As my colleague, Brandon Morse, pointed out, “These riots, looters, and rioters don’t care about George Floyd. They never did.” Despite the pleas from peaceful black protesters who tried to convince Antifa operatives to stop their violent activities, they still happily participated in the destruction of black communities.

If there were ever a time when the GOP could start making overtures to the black community, it is now. Black Americans have never been enamored with the Democratic Party, but up until now, they have not been given an alternative. Hopefully, the former Party of Lincoln will take note.