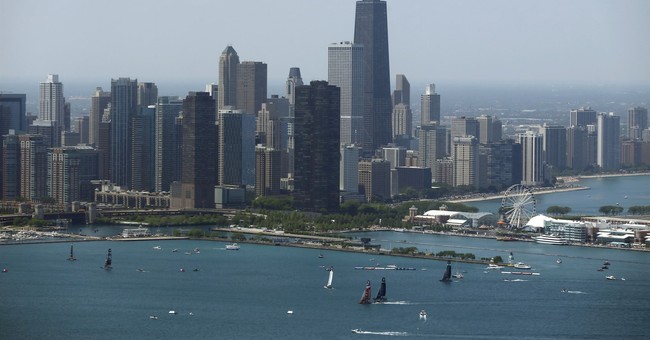 FILE – In this Friday, June 10, 2016, file photo, sailboats practice in front of the downtown Chicago skyline during practice for an America’s Cup World Series sailing event. Many state and local governments competing for Amazon’s second headquarters, including Chicago, are refusing to release details on the tax breaks or other financial incentives they are offering the online giant. Chicago said releasing such information “could give an advantage to another applicant.” (AP Photo/Kiichiro Sato, File)

Local activists in the city of Chicago have banded together to bring awareness to an issue that the media has ignored: Missing black women. Rosie Dawson and Roberta Logwood recently launched the “Stop Taking Our” campaign which is a grassroots movement designed to promote awareness about the increasing number of black females who have been abducted and trafficked in the Windy City.

The group’s objective is to work with law enforcement to address the rash of kidnappings that have occurred in Chicago for years. “We’re not going to allow people to come into our community and just be comfortable in this place, taking our children,” Logwood told WGN 9, a Chicago-based media outlet.

Logwood is no stranger to kidnapping – she has been the victim of attempted abductions on two occasions. The first occurred when she was 8 years old – fortunately, a neighbor intervened and stopped the would-be kidnapper. The second incident happened when a man stole her cell phone and another man pulled up in a car, offering to help. He popped his trunk and attempted to persuade the young woman to get in so they could give chase.

“I did file a police report,” she explained. “The dispatch told me this had happened before and they succeeded in kidnapping the girl.”

The two women are now collaborating to protect the lives of black girls, who are disproportionately more likely to become kidnapping victims nationwide. These girls are typically abducted so that their kidnappers can sell them into sex slavery. According to the Department of Justice, 94% of sex trafficking victims are female and about 40% are black. In 2018, Chicago was ranked in the top five cities for sex trafficking crimes.

One of the contributors to the problem is the media’s apparent disregard for black kidnapping victims. Missing women are far less likely to receive significant coverage by the press than white victims. Studies have shown that white children who go missing receive far more airtime than non-white children even though black and Hispanic kids are far more likely to become kidnapping victims.

In 2015, the William & Mary Journal of Race, Gender, and Social Justice published a piece discussing the various studies that have been conducted on the matter. One report found that black children accounted for 35% of missing cases in the FBI’s database, but only received 7% of references in the media.

A 2016 study published in the Journal of Criminal Law & Criminology yielded similar results. According to FBI data, blacks made up about 35% of kidnapping victims. However, they only represented about 12% of the media’s coverage.

These numbers demonstrate that the news media – which is dominated by the left – has a clear bias when it comes to their reporting on missing children and kidnapping victims. It’s an unfortunate reality given the fact that media coverage is an important factor when it comes to saving these individuals.

Natalie Wilson, co-founder of the Black and Missing Foundation told CNN that press coverage vital when it comes to solving these cases. “It puts law enforcement on alert, and they add additional resources to the case,” she explained. “If no one knows about it, then no one’s doing anything to find them or to help them get the assistance they need.”

The racial disparity in the media’s reporting on missing children and kidnapping victims that has created the need for campaigns like “Stop Taking Our Girls.” The organization has been meeting over the past three months to create awareness and develop strategies to help law enforcement apprehend kidnappers. Dawson told WGN 9 that, “we want to bring awareness to elected officials, we want the police officers to know we appreciate them, but we need them to appreciate us in this community also.”

If the progressives in the media, who claim to care about the plight of black Americans, refuse to give them the coverage needed to contribute to a solution to the kidnapping problem, hopefully, organizations such as these can bring enough awareness to save more victims.