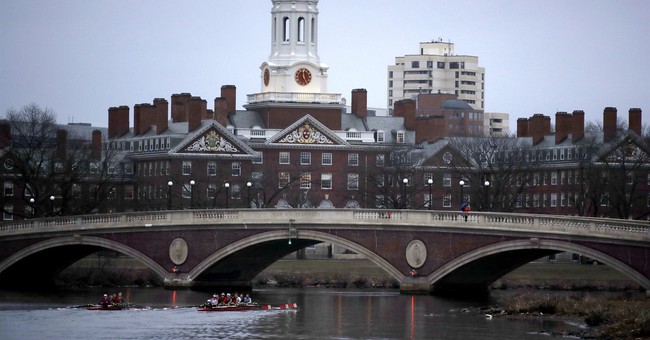 FILE – In this March 7, 2017 file photo, rowers paddle down the Charles River past the campus of Harvard University in Cambridge, Mass. A lawsuit alleging racial discrimination against Asian American applicants in Harvard’s admissions process is heading to trial in Boston’s federal court on Monday, Oct. 15, 2018. Harvard denies any discrimination, saying it considers race as one of many factors when considering applicants. (AP Photo/Charles Krupa, File)

On Friday, The New York Times published an article entitled “Coronavirus Testing Needs to Triple Before the U.S. Can Reopen, Experts Say.” It cites a Harvard research team that has determined the U.S. must more than triple the number of coronavirus tests conducted before it will be safe to reopen the economy.

Currently, 146,000 tests are administered each day nationwide. The Harvard team says the number of tests must increase to the 500,000-700,000 range by mid-May to end the shutdown. The article can be viewed here.

“If you have a very high positive rate, it means that there are probably a good number of people out there who have the disease who you haven’t tested,” said Ashish Jha, the director of the Harvard Global Health Institute. “You want to drive the positive rate down, because the fundamental element of keeping our economy open is making sure you’re identifying as many infected people as possible and isolating them.”

The researchers said that expanded testing could reduce the rate to 10 percent, which is the maximum rate recommended by the World Health Organization. In Germany, that number is 7 percent, and in South Korea, it is closer to 3 percent.

There is variation in the rate of testing and positive results among states, but most need to administer more tests to get to the level the researchers suggest — a minimum of about 152 tests per 100,000 people each day.

The rest of the article is just a discussion of the variations in testing numbers between states, but nowhere does it tell us how the experts happened to arrive at this number.

Great, a new made-up chart and metric from friends of the folks who brought you @IHME_UW. Why is 500,000 tests daily the magic number? Why not 5 million, or 100,000? The numbers that matter are hospitalizations (now ~flat) and the true IFR, which we can tell from PAST infections.”

It’s increasingly clear the focus on widespread testing (as opposed to widespread ANTIBODY testing) is a sideshow designed to delay reopening and take the focus away from the empty hospitals. It’s another version of wait two weeks.

So, here we are again with “study” results from another group of so-called “experts” from Harvard who’ve tossed out a random number that the left will use as their criteria for reopening our economy. I doubt President Trump will pay any attention to this report, nor should he. But for Nancy Pelosi, who keeps saying, “Testing, testing, testing,” this will become the next goal post.

The goal of the quarantine was to “flatten the curve” and “slow the spread” of COVID-19. By now, most cities and regions of the US, including New York State, the epicenter of the pandemic, have managed to achieve this milestone and all of us, who will begin our sixth week of the quarantine, are growing restless.

The Democrats would like to continue the shutdown. They know that the longer the economy is closed, the deeper the recession will be. Saving lives has suddenly become very important to them. They’ve come up with their own plan which involves testing, contact tracing and obtaining state plans from each governor.

Although we haven’t seen their plan, we know it will require far more than a flattening of the curve. And a study like this one from “experts a team of Harvard researchers” is just the thing to justify moving the goalposts one more time.

As Berenson says, this is just a “made-up” chart. And any numbers they plug into the model are “made-up” as well.

When I was in college many moons ago, we were required to read a book called “How to Lie With Statistics.” The book discussed the many ways that information can be misrepresented to mislead an audience. We learned how a single set of data can be manipulated to tell two different stories – or multiple stories.

Let’s hope lawmakers don’t base their decisions on “research” as flimsy as this.

It’s time to get back to work.

Great, a new made-up chart and metric from friends of the folks who brought you @IHME_UW. Why is 500,000 tests daily the magic number? Why not 5 million, or 100,000? The numbers that matter are hospitalizations (now ~flat) and the true IFR, which we can tell from PAST infections. pic.twitter.com/GzGooGhEIE