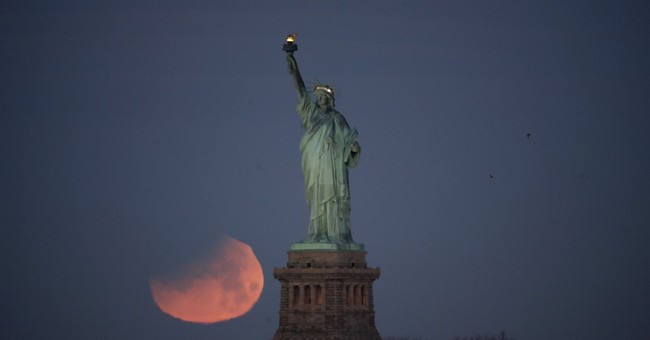 FILE – In this Jan. 31, 2018, file photo, the Statue of Liberty is backdropped by a supermoon, seen from the Brooklyn borough of New York. Workers will be turning off some lights for repairs to the Statue of Liberty’s electrical system. The system that illuminates the statue’s exterior will be shut down for about six hours on Tuesday night, May 15. However, the statue’s torch, crown and pedestal will remain illuminated. (AP Photo/Julio Cortez, File)

If you live in Kentucky and you’re planning to attend an Easter service on Sunday, Gov. Andy Beshear has a message for you. He warns that police will be recording your license plate. You will then be contacted by an official from the Health Department and ordered to self-quarantine for 14 days.

Kentucky will record license plates of those who show up to any mass gatherings, such as church services, and will provide that info to local health departments, who will in turn order those individuals to be quarantined for 14 days, Gov. Andy Beshear says https://t.co/wY1CsTNuTw

Beshear noted that “the state is down to less than seven churches state-wide that are still thinking about having an in-person service this weekend.”

If you’re gonna expose yourself to this virus, and you make that decision to do it, it’s not fair to everybody else out there that you might spread it to. This is just an example of personal responsibility.

The order reportedly does not apply to drive-in services, but seemingly includes houses of worship that implement social distancing efforts and smaller services.

In the video below, Pastor Charles Hamilton of the King James Bible Baptist Church, is told by Greenville police that his rights are suspended.

Ahead of Hamilton’s planned 6:30 “drive-in” service, four police cars arrived at his church. One of the officers tells him they will issue a $500 ticket to each person who showed up.

Video from Pastor Hamilton of King James Bible Baptist Church in Greenville, MS. Church tried the “drive-in” method of holding services & were targeted due to the Mayor issuing an order prohibiting such services. Watch as an officer tells the Pastor that his rights are suspended. pic.twitter.com/zLdT6Qd8ew

Later, on Facebook, Hamilton wrote: “The police in Greenville, MS went to Temple Baptist Church this evening and gave everyone there a ticket for $500 because they had a drive in service. Everyone was in their cars with the windows up listening to pastor Arthur Scott preached on the radio. What is harmful about people being in their cars listening to preaching with their windows up? Christians do you all see what is going on?”

Fox News’ Laura Ingraham touched upon this topic in an interview last week with Attorney General William Barr. He said, “I think religious liberty is the first liberty. It is the foundation of our republic, and a free society depends upon a vibrant religious life among the people. So anytime that’s encroached upon by the government, I’m very, very concerned.”

Anyway, a couple of things. First, I wonder if Beshear would send the police to a mosque on Laylat Al-Qadr, the most solemn night of the year for Muslims.

Second, and more important is the creeping encroachment on our civil rights. Democratic government officials, in particular, appear to be enjoying their new emergency powers. I posted about this on Saturday here.

I asked, “Is it me or does it seem like public officials, from governors to local officials are becoming drunk on power as our national lock-down continues?” I cited numerous instances of needless infringement upon Americans’ civil rights.

For example, former Arkansas Gov. Mike Huckabee was threatened with arrest by local policemen who told him he could not sit on the private beach in front of his home in Florida during the pandemic. Are they kidding us? Huckabee and several of his neighbors, have filed a federal lawsuit against the county and law enforcement.

Michigan Gov. Gretchen Whitmer has pushed her power the furthest. She ordered Home Depot and Lowes stores in her state to close off unessential sections such as flooring, garden centers and plant nurseries. Considering that a lockdown is a prime opportunity to work on projects in our homes, this is just plain stupidity. The store is open, and I can pick up batteries, but I can’t pick up a few shrubs to plant in my garden?

At any rate, Democrats are showing voters everyday why they should vote Republican in November.