Top Federal Reserve Official: 'Every Single Person' Should Be Tested Daily for COVID-19, Then Wear a Badge 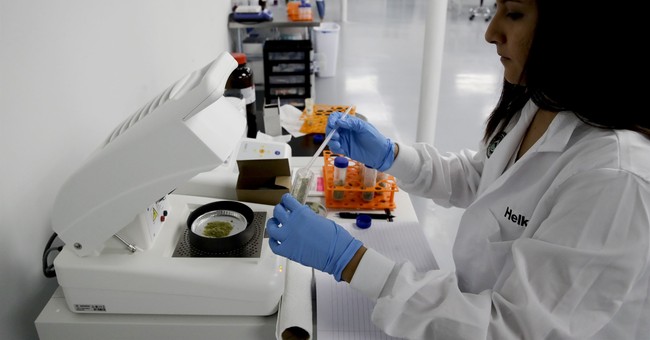 In this Wednesday, Aug. 22, 2018, photo, Helke Criado runs tests on a marijuana sample at Cannalysis, a cannabis testing laboratory, in Santa Ana, Calif. Nearly 20 percent of the marijuana and marijuana products tested in California for potency and purity have failed, according to state data provided to The Associated Press. (AP Photo/Chris Carlson)

James Bullard, CEO of the St. Louis branch of the Federal Reserve, spoke to CBS’s Margaret Brennan on “Face the Nation” over the weekend about what steps we can take to address our current economic woes. Here was Bullard’s response:

You know, I have good news for you, Margaret, because we have, there is a solution using available technology today to fix the economic part of this problem. The solution is universal testing. What you want is every single person to get tested every day. And then they would wear a badge like they would at a – after they voted or something like that to show that they’ve been tested. This would immediately sort out who’s been infected and who hasn’t been infected. That would help the health care sector. But it would also help the economy because we could interact with each other with a lot of confidence.

At first, I was taken aback by Bullard’s statement. The first thing that came to mind was the yellow star Jewish citizens in Hitler’s Germany were forced to wear.

The government requiring us to test daily before going out into society would be the ultimate surveillance tool. As if they don’t already have enough access to our information, the government would now have a sample of each citizen’s DNA.

There’s also the logistical part of it. With a population of 330 million, how could such a plan be implemented? The answer is, it couldn’t be.

The idea of universal testing, however, is a good one.

The problem is, it’s not as easy as one would think to get tested. For example, I may have had the coronavirus over the weekend. I had an elevated temperature which I still have, muscle aches and extreme fatigue. I know I had something. I called my primary care physician’s office and spoke to the receptionist who said the doctor, if she thinks a patient has the coronavirus, will issue a prescription for the test which would be conducted at a central testing site. If she doesn’t believe I have it, I can’t get tested.

So, testing needs to be made accessible than that. It should be available upon request.

On Thursday, the FDA approved a serology test developed by Cellex, Inc. for emergency use as well.

Neither of these tests is considered to be “perfect” according to Fox News medical contributor, Dr. Marc Siegel. The accuracy rate is said to be around 67%.

Since testing is the key, the development of an accurate and easily obtainable coronavirus test must be the top priority for pharmaceutical companies.