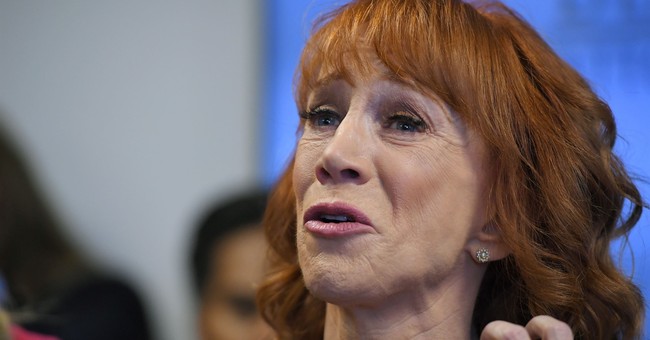 FILE – In this June 2, 2017, file photo, comedian Kathy Griffin speaks during a news conference in Los Angeles, to discuss the backlash since Griffin released a photo and video of her displaying a likeness of President Donald Trump’s severed head. Griffin said in a YouTube video posted Nov. 18, 2017, that she has been on a “Hollywood blacklist” since the photo was released. (AP Photo/Mark J. Terrill, File)

Comedian Kathy Griffin, who once famously posed with a severed head mask of President Trump, is currently in a “#COVID-19 isolation ward room in a major hospital ER from a separate urgent care facility after showing UNBEARABLY PAINFUL symptoms.” She claims “the hospital couldn’t test me for #coronavirus because of CDC (Pence task force) restrictions. #TESTTESTTEST.”

She is suffering and it’s all Trump’s fault. Although she was in agony, she still managed to fire off an Instagram post to tell followers, “He’s lying.”

Below, you can capture a glimpse of Griffin lying in her hospital bed donning a face mask.

‪He’s lying. I was sent to the #COVID19 isolation ward room in a major hospital ER from a separate urgent care facility after showing UNBEARABLY PAINFUL symptoms. The hospital couldn’t test me for #coronavirus because of CDC (Pence task force) restrictions. #TESTTESTTEST ‬

Griffin made herself a rather unsympathetic figure when she posed with a mask of President Trump’s bloody severed head nearly three years ago, a stunt for which she was widely condemned, even by the left.

Griffin lost previously scheduled gigs and at least one endorsement. “The CEO of the toilet stool maker Squatty Potty announced that the company would be suspending an ad campaign featuring Griffin. CNN announced that Griffin would not be returning as co-host for its annual New Year’s Eve program.” She has said she was blacklisted from Hollywood after this incident.

Finally, after a few days, Griffin apologized. With her high-profile attorney, Gloria Allred, by her side, she told reporters, “I’m a comic. I crossed the line … I beg for your forgiveness. I went too far. I made a mistake, and I was wrong.”

The episode has become a defining moment for the comedian, both in her career and her life. In an interview just last week, Griffin told BuzzFeed that, “I’m confronted on the street almost on a daily basis.” I’m not surprised.

This is vile and wrong. It is never funny to joke about killing a president. https://t.co/zIiuKoMyFw

For the record, I am appalled by the photo shoot Kathy Griffin took part in. It is clearly disgusting and completely inappropriate.

The Numbers Don't Lie: Biden Is Dragging the Democrats All the Way Down
Joe Cunningham

Supply Chain Problems Are Going to Get Worse Now That Truckers Are Protesting Mandates
T.LaDuke