Newly Declassified Material Shows FBI Knew in January 2017 Flynn Was Not a Russian Agent, Nor Did Trump Collude with Russia 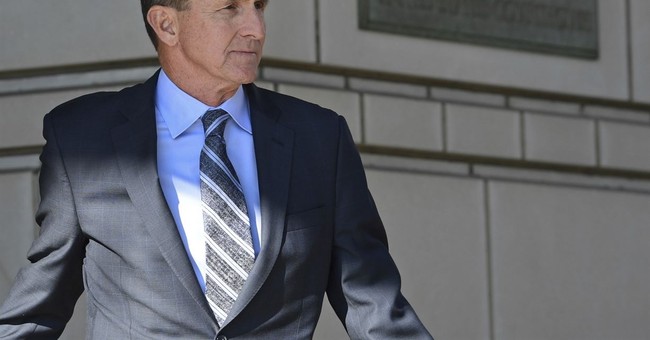 In this Dec. 1, 2017 photo, former Trump national security adviser Michael Flynn leaves federal court in Washington. A whistleblower has told House Democrats that during President Donald Trump’s inauguration speech, Flynn texted a former business associate to say a private nuclear proposal Flynn had lobbied for would have his support in the White House. (AP Photo/Susan Walsh)

Investigative journalist John Solomon has got his A-game going this week. On Wednesday, he reported that newly declassified FBI memos, court filings, and interview notes prove that, shortly after President Trump’s January 20, 2017 inauguration:

1. The FBI knew that General Michael Flynn was not a Russian agent.

2. The FBI had “affirmed key targets of the FBI counterintelligence investigation made exculpatory statements denying collusion to undercover sources.”

A motion filed in September 2019 by Flynn’s attorney, Sidney Powell, in which she requested “Brady Material” (evidence that is favorable to the accused), has been unsealed. In the filing, Powell seeks access to “an internal DOJ document dated January 30, 2017, in which the FBI exonerated Mr. Flynn of being ‘an agent of Russia.’”

Just the News, Solomon’s new website, has obtained a 2018 letter from the Special Counsel’s office to Flynn’s defense team which said, “According to an internal DOJ memo dated January 30, 2017, after the Jan. 24 interview, the FBI advised that based on the interview the FBI did not believe Flynn was acting as an agent of Russia.”

Flynn was the Director of the Defense Intelligence Agency (DIA) between July 2012 and August 2014. The letter also states that Flynn had briefed the DIA on all of his contacts with Russia which is something he likely would not have done had he been colluding with the Russian government.

Okay, boys, so tell us again why the government continued to prosecute Flynn. Solomon explains that U.S. District Judge Emmett Sullivan, who has presided over the case has “so far has concluded that the exoneration of Flynn on the Russia collusion charge wasn’t relevant to his conviction since he pled guilty to a different crime, making a false statement to the FBI.”

Not relevant? He lied to the FBI about a crime he didn’t commit?

Flynn was caught in a perjury trap. The FBI had been looking for a way to charge him with a crime. Although they would have preferred Russian collusion, they settled for lying to the FBI.

So, ten days into Trump’s presidency, the FBI knows that General Flynn did not collude with the Russians. Yet via leaks to the media, the most notable being The Washington Post’s David Ignatius, Americans were led to believe the opposite. Ignatius published excerpts from Flynn’s conversations with Russian ambassador Sergey Kislyak during the transition and presented a “false storyline of Flynn as a Russian stooge was broadcasted across the nation.”

Solomon spoke to Powell and was told the DOJ provided her with “three sentences from the DOJ memo.” She “has been unable to get the full document.”

“It’s just horrible,” Powell said. “They gave us a little three lines summary of it and the letter and told us it existed but have refused to give us the actual document, which I know means there’s a lot of other information in it that would be helpful to us.”

The British government “hand-delivered” a letter to Flynn’s team that “totally disavowed any credibility of Christopher Steele, and would have completely destroyed the Russia collusion narrative,” Powell said.

Flynn himself has no memory of receiving the communique, but people around him at the time do and confirmed the existence of the document, Powell explained. Flynn was questioned about it during his debriefings by Mueller’s team, she added.

“I was told that a copy of the document would have been given to [then-National Security Adviser] Susan Rice as well,” she added. “So the Obama administration knew full well that the entire Russia collusion mess was a farce.”

Instead of responding to the British government’s warning by abandoning the Russia collusion narrative and sparing her client the years-long ordeal of being targeted for investigation, top U.S. intelligence officials hid the communication, Powell said.

Her account confirms information that Rep. Mark Meadows (R-N.C.) provided for a May 2019 article for The Hill.

IC Inspector General Michael Horowitz’s report released in December 2019 confirmed that Steele’s primary sub-source, whom the FBI interviewed in January, March, and May of 2017, had largely debunked the information contained in the dossier. In fact, they knew after the first interview with the sub-source that it was mostly false.

The Horowitz report also revealed that the FBI had used the dossier as the basis of their FISA Court applications to obtain a warrant and three renewals to spy on Trump advisor Carter Page. By the time of the second renewal in April 2017,  they absolutely knew the dossier was a pack of lies, yet they went forward with the application and followed up with a third renewal application several months later. The FBI “hid this from the court.”

On Wednesday, I posted here about an order issued last week by U.S. District Court Judge James A. Boasberg, the new chief judge of the Foreign Intelligence Surveillance Court. In the order, Boasberg questioned why the FBI didn’t alert the DOJ or the FISA Court after they had interviewed the sub-source and found serious “inconsistencies.” He wrote:

Steele obtained this information from a primary sub-source, who had, in turn, obtained the information from his/her own source network. The FBI did not, however, advise DOJ or the Court of inconsistencies between sections of Steele’s reporting that had been used in the applications and statements Steele’s primary sub-source had made to the FBI about the accuracy of information attributed to ‘Person 1,’ who the FBI assessed had been the source of the information in Reports 95 and 102. The government also did not disclose that Steele himself had undercut the reliability of Person 1, telling the FBI that Person 1 was a ‘boaster’ and an ‘egoist’ and ‘may engage in some embellishment.’

A while back, Solomon reported that the FBI had kept a “spreadsheet which similarly found that nearly all of Steele’s information in the dossier was either false, could not be proved, or amounted to Internet-based rumor, making it mostly worthless as actionable intelligence.”

Boasberg also wrote about the FBI’s failure to notify the Court about exculpatory statements from Carter Page (and George Papadopoulos who told undercover agents the Trump Team was not colluding with Russia).

The government also omitted Page’s statements to a confidential human source that he intentionally had ‘stayed clear’ of efforts to change the Republican platform, as well as evidence tending to show that two other Trump campaign officials were responsible for the change. Both pieces of information were inconsistent with the government’s suggestion that, at the behest of the Russian government, Page may have facilitated a change to the Republican platform regarding Russia ‘s annexation of part of Ukraine.

Former FBI Director James Comey’s called all of his evidence of collusion the FBI’s “mosaic.”

Solomon notes the Senate Judiciary Committee is investigating a February 14, 2017, Comey/Trump White House dinner. Trump asked Comey if the FBI could see their way to dropping their investigation of Flynn and Comey notably failed to tell the President that he had already been exonerated. The theory is that Comey may have begun his “pivot away from the bogus Russia collusion investigation” and to “lay a predicate for a new investigation focused on possible obstruction of justice.”

Solomon concludes by saying, “There is now clear and convincing evidence that the country, the president and the courts were kept in the dark about an historic turnaround in the evidence in January 2017, even as defendants were being pressured to plead guilty to crimes unrelated to the collusion allegation. Time will tell whether those who kept this secret for two more years will be held to account.”

My feeling is that the toothpaste is largely out of the tube. As the deep state spent their time trying to frame President Trump and anyone with whom he associated, Republicans, once they became aware of it, have been working to reveal their activities. And they’ve accumulated a treasure trove of evidence. And Lord knows what the Durham team has gathered so far. We have no way of knowing what they’ve found because Durham and his team don’t leak like the Mueller team did on a regular basis. All we know is that the Durham probe turned criminal in October, the team requested all of John Brennan’s communications from the CIA in December (or earlier) and that the investigation has been expanded twice. And all of those are very positive signs.