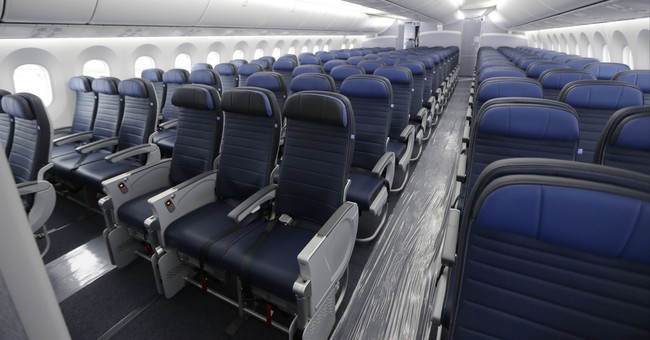 FILE – In this Jan. 26, 2016, file photo, economy class seating is shown on a new United Airlines Boeing 787-9 undergoing final configuration and maintenance work at Seattle-Tacoma International Airport in Seattle. The Federal Aviation Administration would be required to set new minimum requirements for seats on airplanes under legislation to be considered in the House this week. The regulation of seat width and legroom is part of a five-year extension of federal aviation programs agreed to early Saturday, Sept. 22, 2018, by Republican and Democratic leaders of the House and Senate committees that oversee the nation’s air travel. (AP Photo/Ted S. Warren, File)

The constituents of California’s 25th Congressional district dodged a major bullet on Super Tuesday when Cenk Uygur, the host and creator of “The Young Turks,” lost the primary, after winning only 4% of the vote.

We’ve all been there. Your plane is already late and you find out there will be a further delay. You’re aggravated and tired and probably hungry, but in most cases, there’s nothing you can do, but wait.

I have experienced many flight delays in my time, but I’ve never seen a fellow passenger act quite like Uygur did when his American Airlines flight was delayed on Saturday. And, unbelievably, he recorded the entire rant and posted it to twitter. Is he proud of himself?

In the beginning, he explains (to his cell phone) that he’s been there for three hours, and he’s tired and he’s hungry. “If that plane doesn’t actually come from the hangar in 20 minutes…”  (He makes a gesture to indicate how mad he will become.)

The odd thing is that no one pays any attention to him, neither the employees nor the customers, which gives us a clue that this is not his first trip to the ticket counter.

One of the more amusing reader comments said, “This is the guy in the zombie movie who makes the whole crowd cheer when he gets eaten.”

What an entitled, arrogant, self-centered jerk.

Here is a two-minute video @cenkuygur screaming at black airline employees because a flight was delayed pic.twitter.com/dGGFJzTsDt