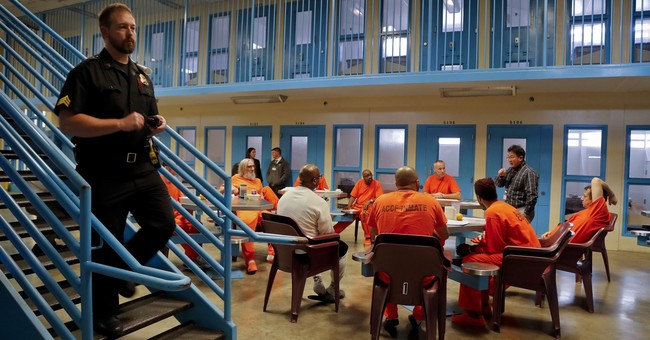 A guard makes his rounds checking cells as inmates gather for a session with Soldier On, Chaplain Quentin Chin inside the veteran’s pod at the Albany County Correctional Facility, Monday, Nov. 27, 2017, in Albany, N.Y. Cell blocks for veterans are an increasingly common feature of state and county lockups as the criminal justice system focuses on helping troubled former service members. (AP Photo/Julie Jacobson)

In the spring of 2010, sixteen-year-old Kaleif Browder, an African-American resident of the Bronx, NY, was charged with robbery. He was accused of stealing a backpack. His family could not afford bail, so he was sent to Rikers Island Prison, where he remained for three years. Two of those years were spent in solitary confinement. During that time, he was not “tried or convicted of a crime.” Following his release, Browder committed suicide. Browder’s story is tragic. That such a thing could have happened is a disgrace. Clearly, action needed to be taken to make sure this never happened again.

The Democratic New York State Legislature set about to do just that. (I don’t know why it took them five years to do so.) And, as usual, the legislation went too far. On January 1, 2020, a new law went into effect that ended cash bail in most misdemeanor and non-violent felonies cases. Both New York Gov. Andrew Cuomo and New York City Mayor Bill de Blasio supported it.

During a press conference on Thursday, the New York Police Department reported that “major crime is up 22.5% this February over a year ago.” And they “attribute the spike to the bail reform pushed through the state Legislature in Albany last year, which is releasing people who have been arrested for one crime to go out and commit another.” The NYPD told reporters:

In the first 58 days of 2020, 482 individuals who had already been arrested for committing a serious (felony) crime such as robbery or burglary were rearrested for committing an additional 846 crimes. Thirty-five percent, or 299, were for arrests in the seven major crime categories—murder, rape, robbery, felony assault, burglary, grand larceny and grand larceny auto—that is nearly triple the amount of those crimes committed in the same 58 days in 2019.

Even de Blasio admits it. He said, “There’s a direct correlation to a change in the law, and we need to address it, and we will address it.” He added that he was “absolutely confident it would be addressed in Albany in the budget due April 1.”

The problem with the law is it “deprives judges of the discretion to keep behind bars criminals who remain a menace to the community.”

The Wall Street Journal addressed this law in an editorial:

Some on the political left, including a coalition of public defenders, claim the cops are deliberately manipulating the figures as “scare tactics.” Ditto for Assembly Speaker Carl Heastie, who is blaming the New York Post, which refuses to take dictation from the city’s progressive powers. Mayor de Blasio is having none of it. “They’re wrong,” he says.

Polls show support for the bail reform dropping fast, and New York’s chief judge says it is the only state in which judges do not have the ability to consider whether a defendant poses a credible risk of danger before releasing him. There is a simple fix that would take care of the biggest problem: Give judges the ability to weigh this risk before letting people out. If Albany doesn’t fix this, we hope the voters run them all out office.

Another crime problem that Mr. de Blasio doesn’t acknowledge is the explosion of minor offenses since the City Council decriminalized such antisocial behavior as urinating in public, smoking marijuana in public, and turnstile jumping on the subways. This creates a culture of tolerance for lawlessness that the bail reform has compounded.

The problems with this new law became apparent immediately. In the first week alone, the NYPD reported that some suspects who had been set free had already committed new crimes.

Across the state, opponents of the new law have publicized cases of suspects set free ─ a serial bank robber, a repeat burglar, a man accused of manslaughter, an alleged hit-and-run drunk driver ─ which they say demonstrate how doing away with bail allows dangerous criminals to remain on the streets. Perhaps the most notorious case is that of Tiffany Harris, a Brooklyn woman who was released after she was alleged to have hit three Jewish women in a bias attack, only to be arrested the next day and accused of an assault on another woman.

It looks as if even Gov. Cuomo is aware of the need to make changes to this law. He calls it a “work in progress.”

How did these politicians really think this would turn out?