Breaking News: President Trump Announces Mick Mulvaney Is Out, Will Be Replaced by Mark Meadows 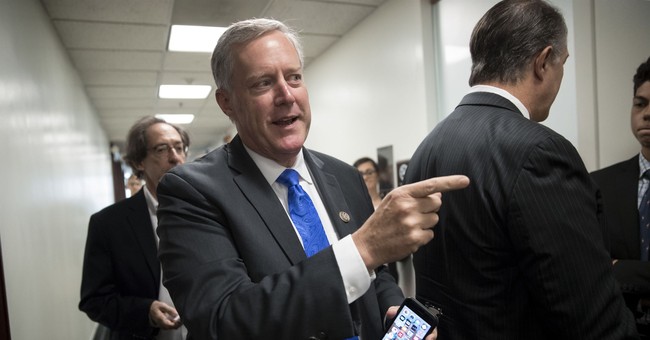 FILE – In this July 28, 2017, file photo, Rep. Mark Meadows, R-N.C., emerges from a House Republican Conference meeting on Capitol Hill in Washington. Sen. Bob Corker is hardly the only Republican lambasting President Donald Trump and raising dark concerns about harm the president might cause the U.S. and the world. He’s just the only one who’s sounding off in public. Meadows criticized Corker, saying he finds “those type of comments to not be appropriate especially coming from the chairman of the Foreign Relations committee, and certainly not in keeping with what I know of the way that things are conducted in the West Wing, having been there multiple times.” (AP Photo/J. Scott Applewhite, File)

Trump wrote, “I have long known and worked with Mark, and the relationship is a very good one.”

This news was not entirely unexpected. There has been talk of Meadows as a possible candidate for this position in the past. He has been one of Trump’s closest allies in Congress, and was a fiercely loyal supporter throughout the impeachment crisis.

In December, Meadows announced that he would not be seeking reelection. At that time, a source told Axios that, “Meadows has no immediate plans to jump into a new role. However, he is open to joining the Trump administration and says he will remain committed to supporting the President.”

Perhaps this was something he and Trump had agreed to back then.

Mulvaney came under fire for comments he made during an October press conference in which he seemed to suggest that Trump had engaged in a quid pro quo with Ukraine. Mulvaney told reporters, “We do that all the time with foreign policy. And I have news for everybody: Get over it. There’s going to be political influence in foreign policy.” His words were played on an endless loop by the media as proof that the President had pressured Ukraine.

Anyway, Mark Meadows is an excellent choice for this role.

….I want to thank Acting Chief Mick Mulvaney for having served the Administration so well. He will become the United States Special Envoy for Northern Ireland. Thank you!