Dems Held Impeachment Hearings Rehearsals on Sunday; You'll Get a Kick Out of Rule #1

Democratic lawmakers, attorneys and aides from the House Judiciary and Intelligence committees spent much of the weekend writing drafts of the articles of impeachment against President Trump. According to the New York Times, the Judiciary Committee is expected to vote on them by Friday, with a final vote on the floor of the House expected shortly before Christmas.

Those who weren’t involved in writing the articles of impeachment were busy rehearsing for today’s hearing. The Times reports that “lawmakers have been encouraged to try to make Latin phrases like “quid pro quo” and concepts like the geopolitics of the former Soviet bloc seem more urgent and accessible to a fatigued public. Explain it in terms of a mayor, they are coached. Explain it in terms of your own experience.”

One Democratic lawmaker described the rehearsals to the Times as “a great deal of tedium punctuated by five minutes of fire” and said that “another planned to bring a seat cushion and blanket.”

House Speaker Nancy Pelosi has stressed that Democrats must avoid “fostering the impression that Democrats relish impeachment.” We’ve heard the Speaker and several of her allies tell us they are moving forward in this “solemn duty” with heavy hearts. Pelosi herself said she is acting “with love in her heart.” In her televised address last Thursday, she said “I commend our committee chairs and our members for their somber approach to actions, which I wish the president had not made necessary.”

Pelosi has invoked her religion several times as well. Too bad she doesn’t share her religion’s view on abortion. But that’s another matter.

Anyway, the most important rule of all is this: “Never ask a question whose answer could not be readily anticipated.” They want to leave as little as possible to chance. Smart strategy actually. Not quite what one would expect from what is billed as an “inquiry” to search for evidence. To me, the advice sounds more like something you would expect from a defense attorney.

This impeachment inquiry has been anything but a search for the truth. It has been a charade designed to reach a goal set by the Democratic Party on November 8, 2016.

Separately, the Times reports, “Laurence H. Tribe, the constitutional law professor at Harvard, planned to travel to Washington on Saturday to discuss impeachment with Democratic members, kept in town over the weekend for two lengthy prep sessions.” Great to know that Tribe is on the scene.

To give you an understanding of just how liberal he is, please read the following excerpt from Tribe’s recent interview with MSNBC’s Lawrence O’Donnell.

We know that this is a president who was abusing his office, abusing his power, betraying his oath, corrupting the next election in a dangerous way. And we know that the very fact that the whistle got blown and that he then decided, well, he’d better release the transcript or almost the transcript of his call with [Ukraine] President Zelensky. We know that that just shows that he will do whatever it takes until he’s caught, and then he’ll wait, and then he’ll do more.

And as soon as we heard the testimony of Robert Mueller, which the president thought exonerated him, he was at it again.

At any rate, you’ll be relieved to hear that Democrats are finding ways to cope with the stress of their hard work and long hours.

The Times’ Mark Leibovich and Nicholas Fandos write, all this “solemnity can be exhausting, and Democrats on the Judiciary Committee have turned to a text chain for moments of levity, exchanging GIFs, atta-boys and morale check-ins by phone.” Glad they’re having a little fun. 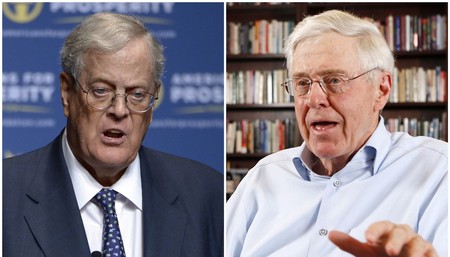