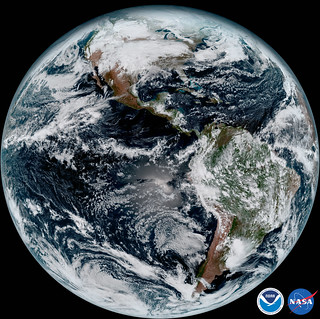 The image shows North and South America and the surrounding oceans. GOES-16 observes Earth from an equatorial view approximately 22,300 miles high, creating full disk images like these from the coast of West Africa, to Guam, and everything in between.

November 19, 2016, a 40-year NOAA/NASA collaborative program launched the next in their series of weather satellites – Geospatial Operational Environmental Satellites (GOES-R).

The National Weather Service and other forecasters using GOES-16 imagery will now have a wide range of uses and societal benefits in areas such as severe weather, energy, transportation and commerce.

GOES-16’s ABI instrument, built by Harris Corporation, can multi-task in a way that older satellites cannot. It can provide a full disk image of the Earth every 15 minutes, one of the continental U.S. every five minutes, and has the ability to target regional areas where severe weather, hurricanes, wildfires, volcanic eruptions or other high-impact environmental phenomena are occurring as often as every 30 seconds.

The ABI instrument transmits the 1s and 0s through NOAA’s ground system which then translates the data into maps and analysis and makes it available to the international community – the Americas, Europe, Asia, and Africa. Amicable coordination between countries is crucial to the program’s full implementation, improvement, and success.

Working with other nations adheres to NOAA’s principle of open data sharing, allowing other countries to benefit from sophisticated GOES-R satellite data that will help save lives and protect communities through more accurate forecasts.

GOES-16 is more than weather forecasting. It can drastically reduce the precious time between lost and found.

Beginning with GOES-I, the Search and Rescue subsystem has been carried on each of the GOES. Distress signals are broadcast by Emergency Locator Transmitters carried on general aviation aircraft, aboard some marine vessels, and by individuals, such as hikers and climbers.

A dedicated transponder on each GOES detects and relays signals to a Search and Rescue Satellite-Aided Tracking (SARSAT) ground station. GOES-R’s transponder will be able to operate at a lower uplink power than previous GOES transponders, enabling GOES-R to detect weaker beacon signals.

Through a rescue coordination center, help is dispatched to the aircraft, ship, or individual in distress. SARSAT is an international program, with many satellites making up a world-wide network of emergency beacon transponders. Since 1982, SARSAT helped save more than 39,000 lives worlwide.

Between 2018, when GOES-S launches, and 2025 three more satellites are expected to orbit the planet extending the life of the GOES program until 2036.

Glitz and Glamour: Julia Roberts Will Present Anthony Fauci With the Award of Courage
Alex Parker

'A Man is a Man and a Woman is a Woman': Student Suspended for Violating Students' Dignity 'Til He Completes a 'Remediation Plan'
Alex Parker

We Have Another School Board Hot Mic Fiasco. Want to Guess What Was Said? Hint: It's Full-Blown Woke.
Townhall
Sen. Rand Paul 'launches into transphobic rant' against Dr. Rachel Levine about her support for gender transition surgery for minors
Twitchy
Peter Doocy Asks Biden About Those $2000/Checks He Promised 'Immediately,' It Doesn't Go Well
Redstate
6 Reasons to Oppose the Orwellian 'Equality Act'
PJ Media