The Entitlement Leviathan in Numbers

Immediately prior to breaking for the August recess, Congress passed a bipartisan agreement to cut spending.  Well, sort of.

Leaders in both parties got together to do something evil and stupid; they agreed to the largest increase in the debt ceiling, without solving our debt problem.  They cut discretionary spending by $6.67 billion for FY 2012, from $1.0497 trillion to $1.043 trillion.  That’s a bit more than half a percentage point.  Worse, discretionary spending (budget authority) only accounts for roughly 28% of our projected $3.7 trillion in outlays for FY 2011.  So we cut about 0.6% of 28% of our federal budget for next year!

But, fear not; the best is yet to come.  The mandatory entitlement spending reforms will be tackled by the super committee.  The only problem is that a committee with such luminaries as John Kerry, Patty Murray, and James Clyburn – will never cut a dime from mandatory spending.

Where does this leave us?

Here is a brief overview of our giant entitlement/dependency/welfare state, which if left unreformed, will lead to insolvency, engendering public riots to the degree that we have seen in Europe this year.

Budget outlays for FY 2011 are estimated at $3.7 trillion.  That number is composed of three categories: discretionary spending including emergency appropriations and total outlays (roughly $1.39 trillion), mandatory spending for entitlements and welfare programs (roughly $2.1 trillion) and net interest on the debt ($225 billion).  Although interest payments will skyrocket as the debt increases and the historically low interest rates invariably come to an end, the mandatory spending is the real 800-pound leviathan in the room.

Even with two long-term wars, our major entitlement spending is still twice that of our defense spending.  Here is the latest chart from the Heritage Foundation comparing the two expenditures: 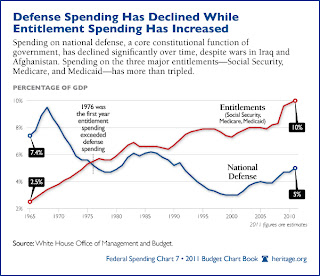 Keep in mind that this chart only factors in the three largest entitlements; Social Security, Medicare, and Medicaid.  If we would factor in other mandatory spending (OMS’s), such as welfare, food stamps, earned income credit, long-term unemployment benefits, child nutrition programs, and SSI, that number would be much higher, probably closer to 14% of GDP.

Here are some of the major mandatory expenditures that comprise the $615 billion in “Other Mandatory Spending:” (Source: CBO and CRS)

$615 billion is quite a gargantuan sum of money to be labeled as “other” on the expenditure side of the federal ledger.  This has been one of the fastest growing parts of the federal budget.  Due to Democrats’ job killing and dependency stimulating policies, the number of people on welfare has skyrocketed.  There is a total of 77 anti-poverty programs and hundreds of other direct and indirect subsidy programs dispersed throughout the 15 government departments.

Unfortunately (or maybe, fortunately), welfare will be a moot point, if we don’t repeal Obamacare, institute free-market healthcare reform to achieve solvency for Medicare and Medicaid, and empower the next generation to control their own retirement.  As this chart from the Heritage Foundation shows, healthcare spending (including Obamacare) and Social Security will consume all of the tax revenue by 2049.

Sadly, we won’t have the luxury of waiting until 2049 to solve this issue.  Social Security has already begun to run annual deficits, and is on pace to face insolvency in 2036.  There is already a report out that Social Security Disability Insurance (SSDI) will run dry by 2017.  The exploding enrollment in SSDI is exacerbated by the fact that any enrollee is automatically eligible for Medicare after two years, irrespective of his age.  Worse yet, the trust fund for old age benefits is already nonexistent; there are only IOUs.  Consequently, even before 2036, every year that we run a deficit, we are actually adding to the debt.

The prognosis for Medicare is even worse. Even as the open-ended entitlement is slated to skyrocket over the next few decades, causing a vicious cycle of higher healthcare costs, there will be less money to fund the program. If no reforms are enacted, the program will run dry as early as 2024.

Clearly, the next president must confront these exigent issues on his/her watch.  Republican presidential candidates must formulate a bold plan to downsize most of the 77 welfare programs, including Medicaid.  Congressman Jim Jordan’s plan to impose ’95 style accountability reforms is a good start.  Concurrently, while voiding the dependency state and everything that perpetuates it, the next president will need to offer robust job opportunities through reforms in taxation, regulation, and litigation.  Most importantly, as we have long advocated in these pages, our next leader must ramp up our energy production and slay the green job-killing machine.

As for Social Security and Medicare, these programs require different reforms because they are paid for by the taxpayer.  Social Security is really very simple.  The government has completely crowded out the individual from his/her own retirement, by stealing over 12% of everyone’s salary and using it for a Ponzi scheme.  Both as a good policy and good politics, the next president must promise to fulfill the obligations to everyone who has paid into the system long enough to become reliant on it.  However, younger workers must be given some option to control their own destiny and assume ownership over the retirement account. [Pete Sessions’s idea for SAFE accounts might be a good starting point]  For those who chose to stay in the current system, and desire that the government control their retirement, the retirement age should be gradually raised.  This way, we will achieve solvency of the current system, while affording more Americans the liberty to control their own destiny, thereby cutting out those bureaucrats who have been impious towards taxpayer dollars.

Medicare is obviously much more complicated.  Due to exclusive third-party payers, and the utter dearth of free markets in the healthcare system, medical care has become too expensive for retirees to divert their Medicare contributions towards personal health savings accounts.  Until we repeal Obamacare, impose free-market reforms and tort reform, there is no way to institute a private opt-out option similar to that of Social Security.  At current costs, the average person will receive almost three times more in benefits than the amount paid into the system.  Instead, the 45th president must propose a plan to work within the current system to make it more free market oriented, thereby driving down healthcare costs on the entire system.  Again, it should be made clear that those workers nearing retirement will not be affected.

It is becoming more evident every day that Obama is eminently beatable, irrespective of whether Republicans offer bold solutions to our problems.  However, for the sake of the nation, the presidential candidates cannot merely sit on the ball and run out the clock.  They must begin to champion bold solutions to our biggest public policy challenge; the entitlement state.  These bold solutions must ensure that the American people, not the federal government, are the most consequential players in issues of healthcare and retirement.

Unlike previous leaders, the next president must not seek to assume power for power’s sake.