This Has Gone Too Far!! 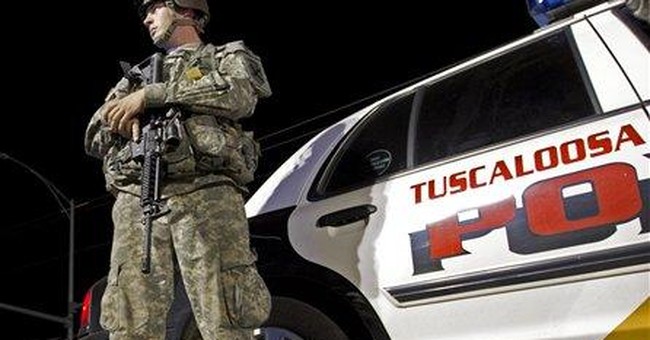 An Alabama National Guard soldier stands watch in the Alberta City area of Tuscaloosa, Ala., Sunday, May 1, 2011. With a long, broad band of this city of 94,000 laid waste by a tornado that killed at least 45 people and destroyed hundreds of homes, businesses and churches, Alabama National Guard troops have been sent to staff checkpoints in heavily damaged areas, (AP Photo/Dave Martin)

Okay, folks, I’m as big a team player as anyone else. Although I’m not always in total agreement with our state and federal officials and their decisions during this crisis, I can generally accept them. But yesterday it seems, the Governor of my adopted and great State of Alabama went a little bit too far.

As I pulled into the Publix parking lot over in Pell City, I was immediately approached by a uniformed member of the Alabama Army National Guard. The Lieutenant, backed up by two of his troops in full battle rattle (ballistic vests, brain buckets and armed with M-4’s), stopped me and asked for ID. I pulled out my Military Retired ID card and handed it to him asking, “El Tee, just what the… is going on here?” The young Lieutenant looked at my ID, popped to attention, saluted and barked, “Good morning, Colonel! I’m not allowed to say. Please go ahead, go in the store, complete your business and move on. You are allowed 10 minutes inside the store.”

I returned the young officer’s salute, grabbed my ID and drove into the parking lot with my head on a swivel. By the time I got to my parking space, I had gotten a pretty good look around. It appeared as though an entire Alabama Army National Guard Infantry Company was setting up a defensive position around the store. As I walked towards the entrance, I could see these guys were indeed expecting trouble. They were loaded for bear…AT-4 anti-tank weapons, sandbagged machine-gun positions, and it looked like they also had an 81mm Mortar platoon from Battalion HQ for indirect fire support. If that weren’t enough, I looked down the street, down towards a local farmer’s market parking lot and there were two Apache attack helicopters being refueled there. Apaches in Pell City!

I walked into the store shaking my head wondering just what our Governor would come up with next to stir everybody up. As I got inside, the store manager, a long time acquaintance, came up and said, “Hey, Colonel Ford! How are you?” I replied, “Have you seen that goat rodeo outside?! What the hell is going on out there?! It looks like some damned FOB in Fallujah!”

He came in real close and whispered in my ear, “I’m not supposed to say anything. But I know you are a Colonel and understand these things. Please don’t tell anyone…but in about an hour, we’re supposed to be getting a large shipment of toilet paper.”

It’s tough out there folks. Sometimes you gotta take some time to laugh. Pray for the folks on the front lines, hang in there…and… Smile…this too shall pass.