There's a Crack in THE DOME. How's it Going to End?

Cameras in place, cue the lights, turn up the mics. And action. Into our view is the most elaborate stage ever seen for a political convention with the enormous Greek columns flanking the stage with two huge video screens displaying colossal images of the Democratic nominee, inevitably our new presidential American idol. 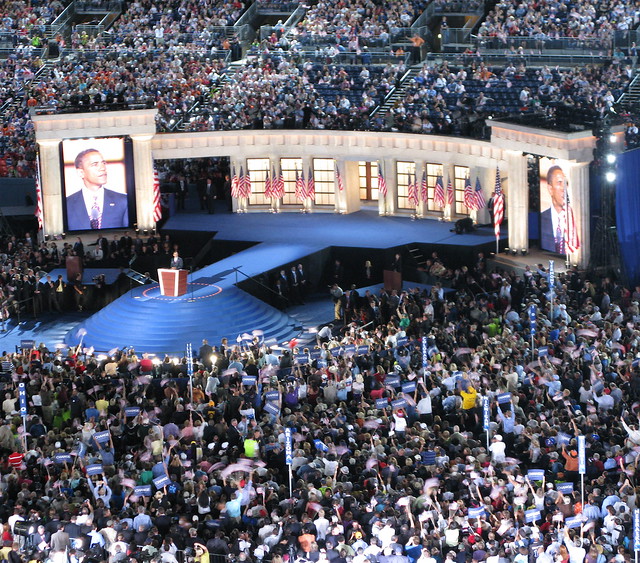 Indeed a monumental stage built in the image of ancient times for a Greek God overlooking his sacrificial sheep.

The plot thickened from that historic and gluttonous night like a Greek tragedy.

Hope and Change is the mantra of the great idol. Yes we can is chanted from coast to coast, speeches are heard from the One like no other: “This was the moment when the rise of the oceans began to slow and our planet began to heal”. Commentators get thrills up their legs and can’t believe what a great orator Obama is and how he transcends race and time. The smartest man to ever run for office is elected President of the United States and is sworn in on Inauguration Day, Jan. 20, 2009.

After that historic day, something unexpected happened to America. Something that many refuse to believe to this day, although many tried to sound the alarm before election day. With soda and popcorn in hand, the American people were ready or were they? Here’s how the movie plays out.

The country finally comes down from their high like a climber from Mt. Olympus, only to find out that the radicals from the 1960’s have infiltrated the White House, but peacefully as appointed Czars. What’s a Czar and how did they get their positions without Senate approval? You are not to question those upon high that know what’s best for all.

The economy is bleeding jobs by the hundreds of thousands. The markets and banks are failing. TARP to the rescue to save the banks and prevent the greatest financial meltdown since the Great Depression. We must pass the huge Stimulus Bill that was touted as the panacea to job creation with shovel ready jobs in infrastructure, education and training and more police and firemen. The answer to keeping the unemployment rate below 8% with promises of 5% soon.

Focused like a laser on jobs and many nights of going to bed at night with the last thought being jobs and the first thought upon waking being jobs, the President and the Democratic lead House and Senate spent the next two years on health care for all. What a noble thought when the only thing the people wanted was a job. Arms were twisted, deals were made behind doors, and religious convictions were compromised like a deal with the devil.

Plans and programs were implemented in the name of saving the economy and getting people back to work. Cash for clunkers, EPA regulations galore, man made contingencies, the war on terror is over, terrorists released from Gitmo, government takeover of industries, bankruptcy laws lay in heap of dust, oil and gas leases suspended indefinitely, CIA interrogators to be tried for waterboarding terrorists, rising gas prices, DOJ sues states for voter id laws and attempts at stemming illegal immigration, FBI manuals scrubbed for references to Muslims, skyrocketing gas prices, apologies to our enemies, animosity towards our friends, pipeline refused, DOMA not recognized, gay marriage is ok, war on women, contraceptives for all without regards to religion, amnesty granted, Don’t Ask, Don’t Tell no longer applies, green energy loans to donors, TSA to unionize, the capitol of Israel is not Jerusalem, Muslim Brotherhood invited to White House, Christian businesses are to be boycotted. Yet still no jobs and it’s getting worse.

This president has put a dome over the American people with a script for transforming this country into something we never wanted. We have been made to be prisoners in our own country with the directors of this film controlling our every move. From the onerous regulations to the omnipresent image of the ruler on high on our TV 24 hours a day. There is no escaping it. This is akin to Woodrow Wilson’s ministry for propaganda called the Committee on Public Information. Today we might call it the thought police. The president even told us as much when he said in an interview with Charlie Rose a couple of weeks ago, “The mistake of my first couple of years was thinking that this job was just about getting the policy right,” he said. “But, you know, the nature of this office is also to tell a story to the American people that gives them a sense of unity and purpose and optimism.”

And like Truman in the movie, the people saw the first crack in the dome on July 13th in Roanoke, VA when the idol famously said, “if you have a business, you didn’t build that”. It has taken nearly four years for the majority of true believers to see that maybe something isn’t quite right with this president and his way of governing.

The symbolism of the Greek temple backdrop at his Democratic Convention speech should have been a warning to all watching. Greek temples are a symbol of idolatry, for raising one up above all of humanity to be worshipped. But sacrificial offerings must be made to appease the Gods. We are the sacrificial sheep and must submit to those that know best for us unless we choose to stand up now and refuse.

Our only hope of escaping this B-rated bad movie known as our fate, is to vote him out of office on Nov 6th in an overwhelming fashion to account for the margin of fraud. There is no other way out of this nightmare we have been cast into without our consent.

End The Obama Show this November or we may witness the worst Greek Tragedy ever: America as we know and love it.