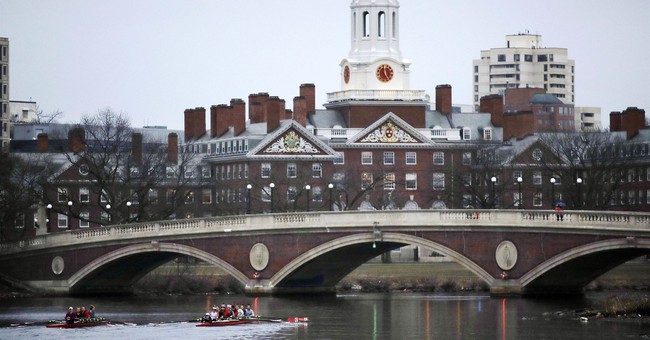 FILE – In this March 7, 2017, file photo, rowers paddle along the Charles River past the Harvard College campus in Cambridge, Mass. A 2018 lawsuit alleging bias at Harvard’s admissions office is pulling back the curtain on the secretive, complex process that decides who gets a place at one of the world’s most selective institutions. (AP Photo/Charles Krupa, File)

Harvard is the world’s wealthiest university with an endowment fund that ranges into the billions. $40 billion to be more precise. If anyone needs stimulus money, it’s not the Scrooge McDuck of schools.

Regardless, the Ivy League college took $8.6 million of the stimulus money meant to keep schools afloat during the pandemic according to Fox Business:

Under the Higher Education Emergency Relief Fund established by the $2.2 trillion CARES Act, Harvard will receive $8.7 million, at least half of which must be reserved for emergency financial grants to students impacted by the coronavirus pandemic. In addition to helping cover tuition, the money could be spent on extra technology, food and housing costs.

The remaining balance can go toward costs incurred by Harvard, the wealthiest university in the country, as a result of the outbreak, such as the shift to online classes.

On Tuesday, President Donald Trump vowed that Harvard would give that money back during his daily virus press briefing.

“Harvard is going to pay back the money and they shouldn’t be taking it,” Trump said, also mentioning the endowments.

TRUMP: “Harvard should pay that money pay… I don’t like it. This is meant for workers, this isn’t meant for one of the richest institutions..” pic.twitter.com/ISp9eBlV9i

However, according to Reuters, Harvard has stated that it won’t pay back the funds and that it planned to “direct 100% of the funds to financial assistance to students, and will not be using any of the funds to cover institutional costs.”

In a series of tweets, Harvard corrected the record about getting the money from the PPP act but instead got it through the CARES Act higher Education Emergency Relief Fund.

(2/5) President Trump is right that it would not have been appropriate for our institution to receive funds that were designated for struggling small businesses.

(4/5) Harvard has committed that 100% of these emergency higher education funds will be used to provide direct assistance to students facing urgent financial needs due to the COVID-19 pandemic.

As reported by the Daily Caller, Harvard vice president for Finance and CFO Thomas J. Hollister addressed the massive endowment the school receives, saying it’s gone down significantly into the $30 billion range since the pandemic began and that it needs to balance its long-term financial welfare. He also added that the endowment has a lot less flexibility than people may believe:

In reporting its $298 million operating surplus and a total increase in net assets of $2.3 billion in 2019, Harvard said that 70% of its endowment is restricted to specific programs, while the remaining funds are “more flexible in nature.”

Harvard’s excuses ring hollow in the face of such a surplus. It’s also interesting that it only announced it would give the money directly to its students only after Trump publicly lashed out at them. Just a reminder that this is the same school that refused to provide paid leave for its subcontracted employees just last month until the college faced public derision for their decision, causing Harvard to walk it back. It would appear that public pressure is the only way to get Harvard to do the right thing.

Still, the right thing in this instance is to give the money back as Trump said. It likely won’t and that should be an F the university should live with for the rest of its life.