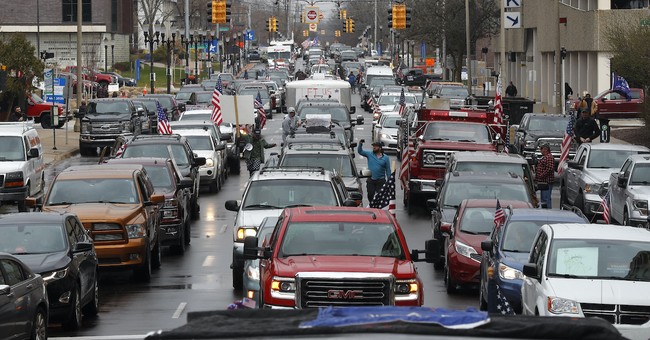 Vehicles sit in gridlock during a protest in Lansing, Mich., Wednesday, April 15, 2020. Flag-waving, honking protesters drove past the Michigan Capitol on Wednesday to show their displeasure with Gov. Gretchen Whitmer’s orders to keep people at home and businesses locked during the new coronavirus COVID-19 outbreak. (AP Photo/Paul Sancya)

On Monday, Michigan’s self-styled Queen Gretchen Whitmer claimed that the protest against her draconian lockdown of the state during the Wuhan Coronavirus pandemic “endangered lives” by blocking routes to a hospital. As it turns out, however, her majesty was lying.

According to The Detroit News, Whitmer held a press conference on Monday where she claimed the traffic jam protest nicknamed “Operation Gridlock” blocked the route to Sparrow Hospital.

“The blocking of cars and ambulances trying to get into Sparrow Hospital immediately endangered lives,” Whitmer said. “…While I respect people’s right to dissent, I am worried about the health of the people of our state.”

However, police officials, hospital staff, and the ambulance drivers themselves all say that Whitmer’s claim is 100 percent inaccurate. The only thing was delayed were some of the staff who just worked a little later than normal:

But hospital, ambulance and police officials said they had no reports of any patients being endangered by the protest.

Sparrow Hospital spokesman John Foren said last week that some hospital personnel were delayed in making their shifts on the day of the protest, causing some personnel to work past the ends of their normal shifts.

But the ambulance entrance to and from the hospital remained clear, Foren said. The Sparrow spokesman said Thursday he had received no reports that ambulances were stuck in traffic farther out from the hospital, either.

Despite some “confusion,” Lansing police had no complaints about any ambulance being locked in traffic during an emergency, said Robert Merritt, a spokesman for the Lansing Police Department. When ambulances on non-emergency runs were in traffic, “rally participants slowly cleared a path,” he said.

“There were NO complaints from any emergency services vehicle being held up while on an emergency run (lights and siren),” Merritt said in an email.

The same could be said for other hospitals in the area as well, who absolutely did have to take alternate routes due to the traffic but they noted that this is no different than if an MSU game was going on. According to officials, they were even prepared for it thanks to the advance notice of the protest:

Mercy Ambulance, which is located just east of Sparrow on Michigan Avenue, also had no delays but some units did take alternate routes because of the traffic, said Dennis Palmer, president and CEO of Mercy Ambulance.

The accommodations were no different from what the company would have to make if there were a Michigan State University game, a traffic crash or construction, Palmer said.

“In fact, we were more prepared because we were given advance notice,” the Mercy Ambulance CEO said.

So not only is Whitmer holding onto her authoritarian power for dear life, she’s also willing to smear Americans protesting said authoritarianism with lies about them putting lives in danger and blocking ambulances from getting to where they needed to be.