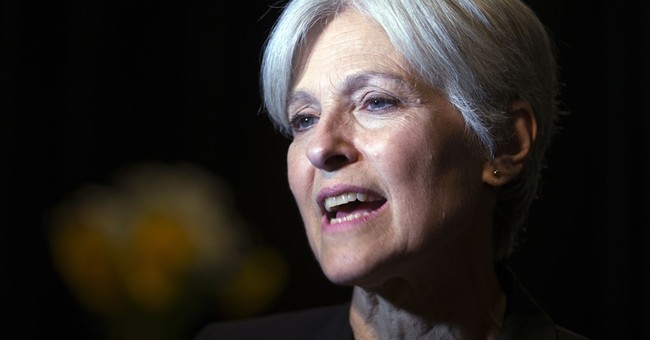 FILE – In this Oct. 6, 2016 file photo, Green party presidential candidate Jill Stein meets her supporters during a campaign stop at Humanist Hall in Oakland, Calif. Green Party-backed voters dropped a court case Saturday night, Dec. 3, 2016, that had sought to force a statewide recount of Pennsylvania’s Nov. 8 presidential election, won by Republican Donald Trump, in what Green Party presidential candidate Stein had framed as an effort to explore whether voting machines and systems had been hacked and the election result manipulated. (AP Photo/D. Ross Cameron)

What do you do when your crazy candidate drops out? You go to the crazier candidate, of course!

The Green Party’s Dr. Jill Stein sees Sen. Bernie Sanders’ dropping out of the race (even though he’s not actually dropping out) as an opportunity to snatch up some votes for herself. If there’s one thing Sanders voters have proven to be, it’s incredibly spiteful. As such, beckoning the wayward Bernie Bros to come and be a part of her camp is an easy task. All it takes is a simple tweet.

“Bernie Sanders ran a good race. Now it’s clearer than ever: establishment Dems’ top priority is sabotaging progressives to maintain their own power. [The Green Party] welcomes all who understand that the fight for people, planet & peace must continue,” tweeted Stein, adding a #DemExit hashtag for good measure.

Bernie Sanders ran a good race. Now it's clearer than ever: establishment Dems' top priority is sabotaging progressives to maintain their own power. @GreenPartyUS welcomes all who understand that the fight for people, planet & peace must continue. #DemExit https://t.co/csqsJCVAch

Thanks, Jill. The Green Party represents what voters under middle age want but are told we can't have: peace, equality, sustainability. Greens being young people in to politics who otherwise wouldn't touch it. The messages of hope are much appreciated.

Green party has my vote!

As Sanders voters were virtually nodding in agreement, Democrats also saw the message and the subsequent response. It did not please them, to say the least. They immediately began attacking Stein as a Russian asset, and sent some less than nice messages.

Remember every green vote is as good as voting republican.

I’m voting Green because I like Trump as well!!

At least Biden never broke bread with Putin you Trader!

People who vote third party are voting for Trump. I have no respect for Trump voters. Back to Moscow, Jill…

Jill Stein is the herpes of presidential elections.

So Vladimir is still sending the checks, huh?

You say some things that sound good but your actions are harmful to America and I don't trust your motivations.
Go back to Russia.

Democrats have reason to panic. Sanders voters have shifted to the Green Party before, and this year, when Democrats are having a hard time with just about everything from their candidate’s mental health to their party’s morale, every vote counts.

You know you’re really scaring the Democrats when they begin pulling out their “Russian asset” card. Stein, in particular, was a suspect in the 2016 Russia-scare, as Russia reportedly began throwing a lot of ad time into Stein’s campaign to attract Democrats to her side and ultimately give Trump the victory.

Or, at least, that’s what NBC News claimed.

This is interesting due to the fact that Sanders voters are already sensitive to the idea that the DNC was out to get Sanders. This may, effectively, cause much of the socialist vote to turn against the Democratic party over time. What this means for the future of the Democrat party is unknown with the exception of one thing: They’re going to lose in 2020.