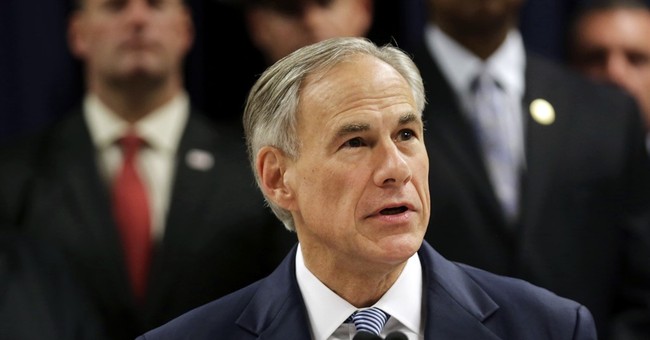 FILE – In this April 10, 2017, file photo, Texas Gov. Greg Abbott speaks at a new conference in Houston. Abbott on Sunday, May 7, 2017, signed a so-called “sanctuary cities” ban that lets police ask during routine stops whether someone is in the U.S. legally and threatens sheriffs with jail if they don’t cooperate with federal immigration agents. (Marie D. De Jesus /Houston Chronicle via AP, File)

The state of Texas is resuming its temporary ban on abortions after a district court judge put up a temporary restraining order against the state, allowing abortions to proceed as normal.

Last month, Texas Governor Greg Abbott banned abortions from Texas during the duration of the Wuhan Coronavirus pandemic after ruling that abortions were not essential, but elective procedures. The Governor argued that since abortions were a “choice,” as its advocates have always presented it, then the procedure was elective and thus was unnecessarily taking up medical supplies that could be used during this pandemic.

A federal judge named Lee Yeakel stepped in and lifted the restrictions, arguing that he “will not speculate on whether the Supreme Court included a silent ‘except-in-a-national-emergency-clause’ on its previous work on the abortion issue.” Yeakel placed a restraining order meant to last through April 13 while legal arguments played out.

However, Yeakel’s ruling has now been overruled. On Monday, the U.S. Fifth Circuit court of appeals has granted temporary enforcement of the ban, pending an appeal.

I thank the court for their immediate and careful attention to the health and safety needs of Texans suffering from the spread of COVID-19. The temporary stay ordered this afternoon justly prioritizes supplies and personal protective equipment for the medical professionals in need. The Governor’s Order temporarily halting unnecessary medical procedures, including abortion, applies to all health care facilities and professionals equally as Texans come together to combat this medical crisis.

I thank the court for their immediate and careful attention to the health and safety needs of Texans. The temporary stay ordered this afternoon justly prioritizes supplies & personal protective equipment for the medical professionals in need.https://t.co/xLj8nuyGbK

“For years, abortion has been touted as a “choice” by the same groups now attempting to claim that it is an essential procedure,” Paxton said. “All Texans must work together to stop the spread of COVID-19. My office will continue to defend Governor Abbott’s Order to ensure that supplies and personal protective gear reach the hardworking medical professionals who need it the most during this health crisis.”

Planned Parenthood was naturally salty about the move and vowed that the fight wasn’t over yet.

We won't stop fighting for our patients. This is not over. #AbortionIsEssential https://t.co/6hwr3I9W2F

While they are correct about the fight not being over, it’s difficult to see how abortion industries can maintain business during a time when elective medical procedures are being halted. Abortion is definitely not a necessity and is, as its advocates have constantly reminded us, a choice they make. As it is a choice, it is not an essential service and thus any medical supplies should be made available to healthcare professionals who need them for services that need to performed now.