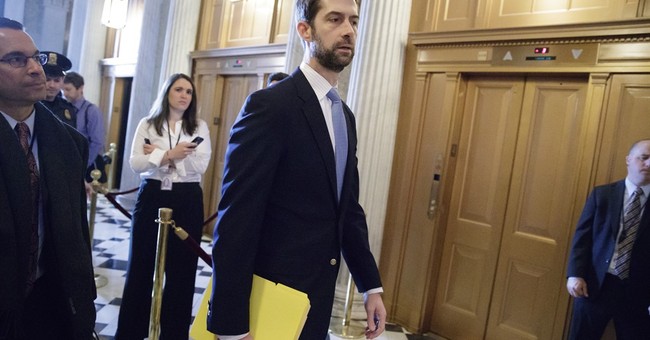 In this photo taken March 15, 2017, Sen. Tom Cotton, R-Ark. makes his way to the Senate chamber on Capitol Hill in Washington. One of President Donald Trump’s strongest Senate allies during his campaign has displayed an uncanny knack for complicating his early weeks in office. Cotton has made waves and headlines knocking the health insurance overhaul being spearheaded by Speaker Paul Ryan and the president. (AP Photo/J. Scott Applewhite)

As we deal with a pandemic caused directly by the incompetence and shadiness of the Chinese government, Sen. Tom Cotton (R-AR) is looking to go on the offensive and hit China in one of the places they have us at their mercy.

Cotton, along with Rep. Mike Gallagher (R-WI), has introduced a bill that will end our dependence on China for our pharmaceutical needs. Known as the “Protecting Our Pharmaceutical Supply Chain From China Act,” the bill will require purchases of drugs from China to cease for government-run hospitals and more according to an article they co-wrote at Fox News:

Our bill would require federal entities like the Department of Defense, VA hospitals, Medicare and Medicaid to cut off purchases of drugs with Chinese ingredients no later than 2025. This requirement would phase in over a period of years to give drug companies time to adjust, but would put clear pressure on importers to stop doing business with the CCP. The bill also would require drug companies to label the origins of ingredients in their drugs, so U.S. consumers are better informed of where their medicine comes from and whether it’s likely to be safe.

Finally, our bill encourages the medical industry to manufacture in our country again by offering full and immediate expensing of factories, warehouses and capital goods related to the manufacture of drugs and medical devices on American soil.

Cotton appeared on Fox Wednesday and spoke of his motivation behind the bill.

China recently threatened the United States with cutting off supplies of life-saving drugs and letting our country “sink into the hell of a novel coronavirus epidemic.”

A whopping 93 percent of ibuprofen, as well as most of our generic drugs, come from China. Should China make good on their threat, we would be in quite a bit of trouble. This new bill would remove that threat and put a massive hole in China’s income.