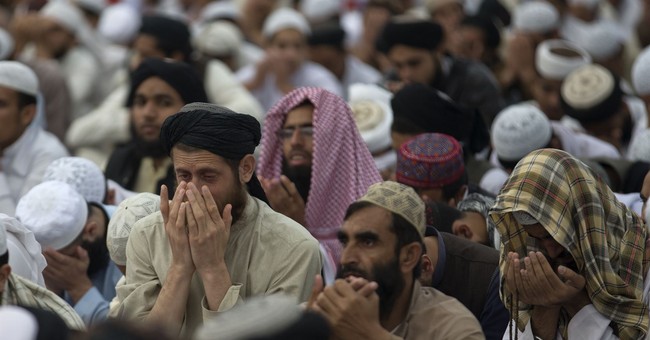 Supporters Pakistani religious party Jamiat Ulema-e-Islam pray during a rally near the Parliament to condemn a Supreme Court decision that acquitted Asia Bibi, a Christian woman, who spent eight years on death row accused of blasphemy, in Islamabad, Pakistan, Friday, Nov. 2, 2018. The release of Bibi was apparently delayed Friday after talks failed between the government and radical Islamists who want her publicly hanged. (AP Photo/B.K. Bangash)

Shi’ite Iraqi Islamic scholar Hadi Al-Modarresi thought that the Wuhan Virus was divine and a tool by which God was smiting his enemies. He thought he would sit back as all of his beliefs were proven right as the virus swept across the lands of heathens. He thought he’d go untouched.

According to Memri.org, Modarressi went on a  rant on television calling the virus God’s punishment, specifically against China, for the government abusing Muslims:

“It is obvious that the spread of this virus is an act of Allah. How do we know this? The spread of the coronavirus began in China, an ancient and vast country, the population of which makes up one seventh of humanity. More than a billion people live in that country. The authorities in that country are tyrannical and they laid siege to more than a million Muslims and placed them under house arrest. The journalists in that country began to mock the niqab of Muslim women and they forced Muslim men to eat pork and drink wine. Allah sent a disease upon them and this disease laid siege to 40 million [Chinese people]. The same niqab that they mocked has been forced upon them, both men and women, by Allah, by means of the state authorities and officials.

“Islam forbade people from eating insects, but [the Chinese] mocked this matter. And there you have it, this disease spread from the world of animals – be it bats, ants, or snakes, the result is the same – to the human world and it has scared humanity in its entirety.”

Iraqi Islamic Scholar Hadi Al-Modarresi, Prior to Being Infected with Coronavirus: The Virus Is a Divine Punishment against the Chinese pic.twitter.com/7NiQki6qBy

Now it’s being reported that Modarresi himself has contracted the virus. So I guess Allah is none too happy with him either.

Modarresi tweeted out that he has a marked improvement in health and also tweeted a picture of himself wearing a surgical mask.

“O Allah, bless Muhammad and the family of Muhammad, and reveal all my distress with them, and spare them all their worries, and relieve me of them with all sorrow and cease to them with all fear, and distract me from them with amounts of affliction, bad judgment, grief of enemies, and gloat of enemies.” “Disclaimer: The health of His Eminence is in a marked improvement, praise be to God. Your prayers for him and other believers,” he tweeted.

Just a reminder to everyone that the Wuhan Virus is not God’s punishment. It’s a virus. A naturally occurring thing on our planet. Wash your hands and take precautions and you should be fine. We don’t need to get Biblical here…or, in this case, Koranic.