Some Much Overlooked Facts Unravel the Emotional Neil Young/Spotify Squabble

Mr. Young was not exactly negotiating from a standpoint of strength -– and a Spotify man doesn’t need him around anyhow.

Things move fast within the world of streaming. Within seven days, we have been treated to singer Neil Young rising up and delivering an ultimatum to the streaming music platform Spotify over its willingness to allow Joe Rogan a platform, and then Spotify responding by basically pointing the dino-rocker towards the unlocked “exit” door. What has been lost in this imbroglio has been a few facts, and some common sense.

The cantankerous crooner’s gripe revolved around the controversy surrounding Rogan’s podcasts. In his letter stating his desire for Spotify to drop the podcast king, Young said,

“Spotify has very recently become a very damaging force via its public misinformation and lies about Covid.”

He cites the now ridiculed letter taking exception to Rogan that was allegedly written by hundreds of doctors, but was not. Then Young turns condescending to his own fans.

He stated that most of Spotify’s listeners are 24 years old, and that they are impressionable and easy to swing to the wrong side of the truth. This is just a wrong approach, on many levels, the first being I am dubious about how large the Neil Young fanbase is at that age. But 24 is hardly the age of unvarnished and completely naive, unworldly youth. Young had an explosive career by that point in his own life.

As an example, when Young was this age, he had already cut numerous albums with Buffalo Springfield, and Crazy Horse, and joined Crosby, Stills, Nash, and Young. He had appeared at Woodstock, and he penned the classic anti-war anthem, “Ohio”. For him to denigrate the audience in this fashion is just an insult. But Young seems incapable of rationalizing this, as well as the fact that he has now become the polar opposite of what he has long represented.

Understand that the man who wrote “Rockin’ In The Free World” is working to kill off someone’s free expression. And why? Because he is lobbying to support the narratives of the government and the media complex. This is not the rock-n-roll spirit, taking up sides with The Man.

There are many details in the Neil Young-Joe Rogan issue that basically unravel his stance. We have already seen that Young was not delivering his threat from the standpoint of strength. Spotify has placed its priority on podcasts some years ago. To bring Joe Rogan over to its platform, the company shelled out $100 million. He pulls in over 10 million listeners to his broadcasts. Neil Young is not delivering content that the platform needs, and the company reacted swiftly to his ultimatum as if they had a meeting to get to right away.

Now understand, Young was peacocking in his outrage–nothing more. He was not receiving much, if anything, in the way of royalties from Spotify. Most of the streaming rights for music were struck with the labels, who receive the royalties. You see this in Neil’s own words, regarding the desire to move from the outlet; “I was reminded by my own legal forces that contractually I did not have control of my music to do that.”

He then thanks his record label – Warner Brothers/Reprise Records – for supporting him in the decision. This is because they are sure to absorb more of a financial hit than Young. 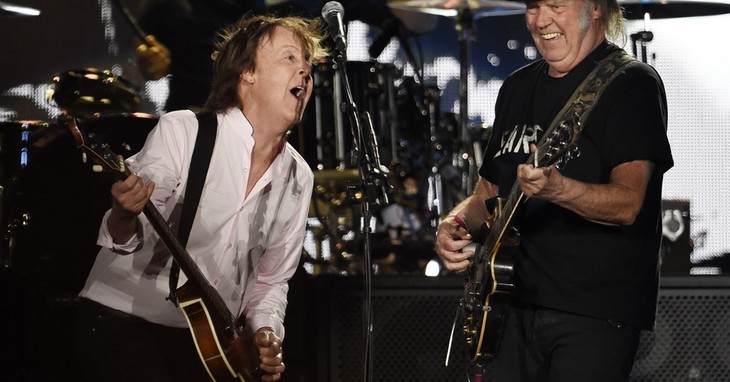 Paul McCartney, left, is joined by Neil Young during his performance on day 2 of the 2016 Desert Trip music festival at Empire Polo Field on Saturday, Oct. 8, 2016, in Indio, Calif. (AP Photo)

Young is also posturing here because not only did he have little skin in the game, but he has already cashed out. See, last year, he sold off a 50 percent stake in the rights to his music catalog, to the tune of well over $100 million. So, whatever pittance of royalties he might have received through the Spotify-record label, music rights filter was unlikely to even be felt by him.

All of which makes this supposed noble stance by the septuagenarian rebel completely impotent. He drew press attention for following the media script, ultimately placing nothing at real risk, and the company answered with a shrug.

Young pocketed $150 million last year selling off his catalog, so this is nothing more than grandstanding on behalf of the government-approved narrative.

Such an edgy rebellious rocker.

The only people possibly impressed by this display are those who are obediently hanging on every word delivered by the government, and bowing to their political betters. Just like Neil Young.