Charlie Sykes, the one-time longtime conservative figure has become nowadays one of the reliable cranks of the crowd of GOP pariahs — the Never Trump contrarians. It is a difficult time for these ‘I’m Walking Out-casts’ as they have turned their back on the Republican party out of a claimed adherence to conservatism over party. But in so doing they have thrown their full support behind non-conservative Joe Biden, and that has not gone well for them; at all.

Chaz writes an op-ed for Politico, not at his home base at The Bulwark mind you, where he laments that the Republicans are somehow losing out on politicians who are walking away. It is a familiar tableau for anyone with teenagers; one person breaks up with the other in an emotional fashion, then later becomes deeply bothered when the scorned lover is not falling over themselves to get them back.

For years I have called out this faction with a basic question-slash-challenge. If they are so firm in their belief that they hold true conservative principles then why are we not seeing their efforts at delivering those candidates who espouse the principles they bemoan are being ignored in the GOP? Look across the NT landscape, and there is no such delivery. The Lincoln Project was strictly focused on defeating Trump. The Bulwark staff spends time detailing the problems in the GOP. And whether it is Sykes, Bill Kristol, Jennifer Rubin, Max Boot, Jonah Goldberg, and any other all they manage to do is sourly describe what they do not like about the Republicans and explain why they were justified siding with Biden.

These pride-filled pundits are on a political ice floe, drifting slowly away from the shore of relevance and realizing there is little hope of paddling back. They scorned one party entirely and in the face of a blatantly inept Biden cannot fully criticize the man, due to their exuberance in endorsing him. All of Joe’s foibles were predictable, but he was not Trump so he was the better selection. Now they are bound to a severely non-conservative bungler, their former party has no interest in taking them back, and they are taking the next course of action.

Sykes details this reality of numerous Republicans retiring by focusing on Anthony Gonzales, a Representative from Ohio who has recently announced he will not be running for reelection next year. Gonzalez is, as described by Sykes, a rising star and running in a safe seat for the GOP with a decent war chest, all while sporting a strong conservative voting record. But he will be walking off because his taint as one of the Republicans who voted to impeach Donald Trump in January is closer to a scar.

The reasoning Gonzalez gives is that he and his family have endured death threats as a result of his anti-Trump position. While not intending to diminish this if it is in fact a reality, it is something worthy of questioning. This alluding to death threats has become a reliable go-to when discussing any faction of the GOP and a connection to Trump. Recently, when an Associated Press reporter published a deeply questionable article on Ron DeSantis profiting from Regeneron Covid treatments, he stated the criticisms he received included threats to his life. I have a difficult time seeing who would be inspired to violence over an errant accusation regarding a medicinal treatment.

But what makes the Gonzalez claim questionable is that he says that the threats are a direct result of his Trump opposition. However, in describing what he will be undertaking after he leaves office, he states emphatically that he will continue to fight against the prospects of Donald Trump.

Gonzalez insists that, despite his retirement, he is not abandoning his opposition to Trump nor his determination to prevent him from holding office again. “Most of my political energy will be spent working on that exact goal.”

This means he has to quit because opposing Trump threatens his family, but as a result, he will undertake the very same activity that is threatening his family. Sorry, but I have a hard time square-pegging that paradox.

Even Charlie Sykes does not adhere to this rationale. While he gives us the sympathetic explanation Sykes goes on to detail the real motivation behind walking away.

The answer is Gonzalez didn’t quit because he feared he couldn’t win, but because it just wasn’t worth it anymore. Winning, it turns out, is not winning if the prize feels a lot more like a loss. This was the key to his decision to self-purge: He could spend a year fighting off merde-slinging deplorables, only to win another two years sitting in a caucus next to Reps. Marjorie Taylor Greene (R-Ga.), Madison Cawthorn (R-N.C.), Paul Gosar (R- Ariz.) and the other avatars of Trumpism.

This feels like the more plausible explanation — winning means that things would just be too hard. Fighting against the very faction that you claim needs to be fixed would be difficult. Sykes claims that Gonzalez realizes criticizing Trump is supposedly political suicide, except he already listed off all the reasons Gonzalez should coast to a victory, along with the fact he was elected in November with a higher percentage in his district than Trump received. That means he has juice and can actually fight the nefarious force.

But fighting requires will, and that is tougher than supposedly speaking truth to conservative power. Look at the biggest anti-Trump names in the party — Liz Cheney, and Adam Kinzinger. They are willing to speak up but do little else. Cheney was stripped of her appointments because she could only spout off about Trump without offering any leadership, and Kinzinger basks in the attention he receives from media outlets like CNN and MSNBC. Talking tough on Trump is enough. Working against him is rarely an option.

Gonzalez is exemplifying this in his move. The fear of family threats is a mystery since he is pledging to fight against Trump all the same; then why leave? You are still engaged in the dangerous activity, so if you truly wanted to keep the bad man at bay then leading from within the party is the most effective tactic.

Walk away, is the easier path to take for Gonzalez, rather than deal with the unpleasant figures he deems to be beneath him. This means he cannot even attach himself to political martyrdom as a result; he was not vanquished in a noble cause, he just quit. This cuts to the character of the Never Trump crowd. They want the nobility attached to voicing opposition, but they do not want to actually work at affecting change.

The plan was to complain and have others take up their cause and then bask in the glow of being the wise leaders of D.C. When their derision and condescension was not embraced they turned sullen, and then turned against the party. Actually offering solutions and working towards change was not a consideration. As a result they are without an allegiance and they are taking the easy way out — by simply walking out. 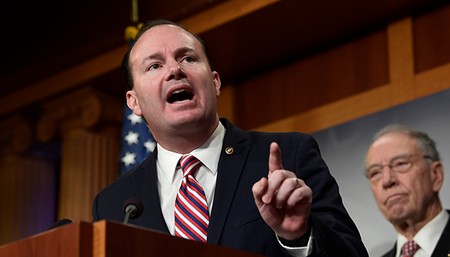