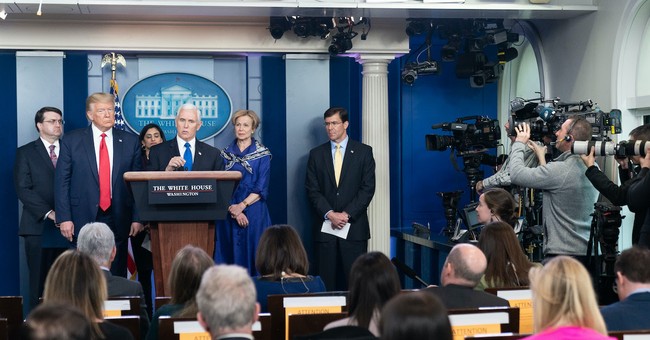 Watching the behavior of our journalists the past few weeks has seen them become less needed.

The industry that has long cloaked itself in the role of serving the public and working to correct the problems that affect citizens has been on display these past weeks/months working diligently to not be in service to those targets. With the emergence of the Wuhan coronavirus we have watched as the press has been very energetic and certainly putting in the time, but in an apparent reality where there seems little interest in serving the public with information.

Targeting the President has been the obvious priority, and this has been routinely displayed by the ceaseless contradictions at play. The press has been all about offering up a critical voice to any of the moves of the Trump administration, except after weeks of this it has become obvious — that is ALL they are capable of. This is not to say that President Trump is above criticism, nor to imply that he has made no missteps or malaprops in the process. But the media have been intent on one thing alone; casting him as incompetent.

This is revealed by the simple presence of their own contradictions. Look how routinely they have railed at the President over actions not taken, and then when he does, in fact, take those very same actions he absorbs criticism anew. He was incompetent for not closing borders to travel, then xenophobic when he closed them. He was not supposedly getting advised by medical professionals, then was accused of acting like a doctor when he was advised. He was accused of taking on the role of a dictator by heading the initial response, then when he properly ceded control to the governors to operate state relief efforts it was said to be sloth in his leadership.

Just recently, he has been experiencing this whiplash towards vaccines and remedies. The press was demanding that the administration was not doing enough to come up with a cure. This same press was choosing not to report on the numerous ways the administration was loosening government restrictions so businesses could be freed up to work for solutions. Then when it appeared that a possible cure could be on the horizon the very same press railed against the announcement.

Trump was accused of everything from recklessly dispensing medical advice, to experimenting on the sick, to inspiring shortages of the very drugs he was previously called upon to generate. This sophomoric behavior has not gone unnoticed. A growing tide of people is looking for ways to bypass the narrative-addicted media and get the needed information via any other means possible. This is because one fundamental truth is becoming obvious — the press is not nearly as interested in serving the public as it is in serving its own agenda.

Look at one other contradiction that has reared its head. For the past few days, there has been a growing vocalization from those in the press for news outlets to stop broadcasting the daily press briefings by the President and his coronavirus response team. This comes after a duration when the same journalists were wailing that there were not enough announcements from the administration. During the past few weeks of briefings, look at what the media focused upon — the demographic makeup of the response team; the name of the virus was racist; the alleged rift between Trump and Dr. Fauci; the things not being done or why there was a perceived delay in enacting responses.

The result of this petulance has been the President, and his crisis management team, coming off as a very competent group displaying leadership in this upheaval. The approval numbers in the administration’s handling of the crisis have been strong, rising each week. The latest Gallup poll sees public approval for Trump’s handling of the crisis up to 60%. The response from the press, when presented with these numbers, has been to call out for these briefings to no longer be broadcast to the public, the very people the press are supposedly interested in serving with details.

And in light of these nonsensical focuses, we also saw the press becoming the de facto PR wing of the Chinese government. That claim of racism for using the term “Wuhan virus’’ derived directly from the Chi-Com leadership. A number of stories have been written that actually touted the progress and advancements of the Chinese, all while completely glossing over the steps that the very same government took in denying news of the virus getting out and allowing it to spread into a global problem.

This is because our press corps have been intently focused on one story — what will it take to make Trump look bad? If the story looks positive or can be construed as favorable to the man then it does not get reported. As proof of this, note something lacking in the media circles right now. Normally, when we have a huge story of national interest like this, particular journalists distinguish themselves. We normally see one or more personalities rise up as a budding star of sorts, the kind of media figure you see becoming an important figure in their industry.

After weeks of round the clock coverage of a mounting crisis on a national stage, we have no such figures rising up. Who is that next ‘’serious’’ journalist moving up to the next level today? We have not been presented with one, because the herd mentality has been one of pettiness, griping, and trying to break the bigger criticism of administration incompetence. No one seems willing to take a lead on this and report on the core details and the things that would help the country.

As a result, once we as a nation recover and get back to our living standards, the press is going to find they are less needed in the lives of those they shunted. Months from now when life is back to normalcy the press is going to find they have even less influence. Those striving to be noticed will likely be given reminders on how they acted at the start of this year.