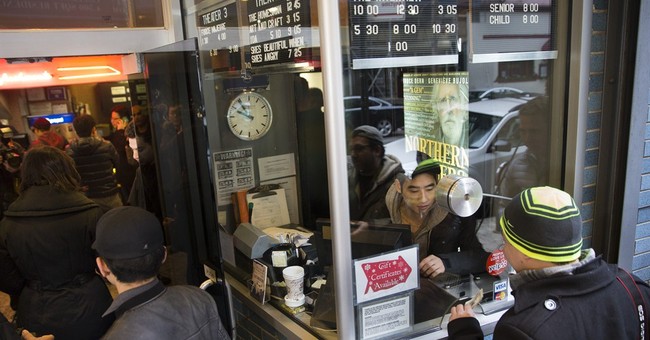 The virus infects output this week.

It seemed inevitable that the outbreak of panic across the nation was bound to impact the theater business. While last week actually saw a small growth this weekend there was a massive impact, as the total box office haul of all titles in release fell -45% from last week, hitting a 22 year low.

Going forward there is nothing but question marks replacing dollar signs. The number of theater closings will continue to fluctuate, and already major studio release titles have been removed from the calendar. These details will have far-reaching effects on the overall industry and the calendar is going to become completely shaken up once normalcy returns. But until then, for the coming weeks, it appears there is going to be very suppressed figures coming out of theaters.

1. ONWARD – $10.5 Million
A little bit of a surprise that it repeats as the top film, but predictions were essentially tossed out as a result of the viral impact. One staggering metric that possibly explains the marketplace is the Pixar effort plunged a massive -73%, setting a record for the biggest second-week drop in that studio’s history. To date, it has taken in $60 million, but the prospects are dismal. Considering the Spring Break family frame is all but removed now this title is very unlikely to see the $100 million mark reached.

2. I STILL BELIEVE – $9.5m
The faith-based release from Lionsgate actually held up better than some might expect. Originally it was looked at as pulling in around $12 million, or so, and thus this is not as tragic as things could have been. Given it was a very modestly budgeted affair, at just $4 million, this title will see a profit soon enough, no small feat in this dissolving marketplace.

3. BLOODSHOT – $9.3m
Sony played this Vin Diesel action piece close to the chest, with scant advertising until the past week. The studio placed it in less than 3,000 screens and you wonder if maybe they did not undercut themselves. The screen average was the best for the weekend, so it is possible they left some cash on the table by scaling back the release like this. The film had an international target but the overseas business has been severely curtailed with theater closings across numerous countries. The global take was only $15 million, and this will be a monumental struggle to find profits, to be sure.

4. THE INVISIBLE MAN – $6.01m
Taking a hit of -60% is purely market-related as this has been a hit until this point. It has gathered in $65 million on just a $7 million budget, in typical Blumhouse fashion.

5. THE HUNT – $5.32m
In less-typical Blumhouse fashion is this seemingly cursed production. Originally set to be released last fall, but it was pulled from theaters in the wake of a series of shootings in the news. Now it suffers a second time as a result of real-life events. About the only good news for Universal is Jason Blum keeping the budget down, so the exposure here will be minimal.

6. SONIC THE HEDGEHOG – $2.57m
Might be safe to say the run is just about over in this environment, but at least the studio enjoyed the spoils. It is about to race past $150 million domestic after hitting the $300 million mark in worldwide receipts.

7. THE WAY BACK – $2.41m
After a modest debut last week this Ben Affleck drama drops a steep -70%, when what it needed was some long term help. Warners will wave the white flag on this attempt.

8. THE CALL OF THE WILD – $2.24m
It has just gotten past the $100 million level, but this was a seriously expensive production for 20th Century Fox. It probably needed to get well over $250 million to see a break-even point.

9. EMMA – $1.37M
This period costume drama was already struggling to find its niche audience, and now the implosion in the market means it will fade with little to show for the effort.

10. BAD BOYS FOR LIFE – $1.1m
The January hit will be gone soon, after a strong 9-week run. $200 million in the states was doubled by the overseas market, so a very solid hit for Sony.

Gov. Kathy Hochul Sharply Criticized for Blaming 'A Shot from an Illegal Gun' for Death of NYPD Officer
Townhall
Virginia Dem accidentally shows why Joe Biden does NOT have any sort of mandate
Twitchy
A Canadian COVID Hysteric Goes to Florida and Absolute Hilarity Ensues
Redstate
Where the Hell Are the Men?
PJ Media