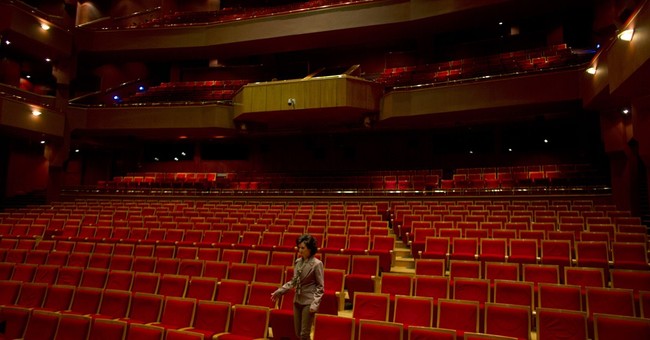 As the entertainment complex is hit by Wuhan panic there are solutions, including one overlooked option.

This weekend saw a steep dropoff in the business inside the motion picture movie houses. While not unexpected that the ongoing concern/panic over the viral outbreak in the country would impact the movie industry, as it has numerous other business interests, some of the results and the solutions looking forward are indeed interesting.

This past weekend saw the overall box office tally plunge -45% from last week, with the final amount reaching a low that has not been seen since 1998. This is due to a number of influences on the marketplace, all due to the viral outbreak response. Some are due to the restrictions on the exhibitors, and some a result of the audience response.

Over the weekend, it was reported that 25 theaters had closed down entirely, bringing the total number of closures across the country to over 100. Many of those were due to local governmental calls to cease business operations with congregating numbers of people — mostly in larger cities. A number of the closings were due to loss of foot traffic; it was too costly to remain open without sufficient ticket sales.

A few of the larger cineplexes stayed open but had an adjusted ticket availability — selling off only half of the available seating, for example, so customers could remain properly spaced from each other. It remains to be seen just how widespread these closings become in the coming weeks.

One other result of these numbers has been the growing number of movies that have been pulled entirely off of the release schedule. Some of the bigger titles that have become placed in release limbo are Disney’s ‘’Mulan’’ and the next James Bond feature ‘’No Time To Die’’, which was set for next month but now is slated for a November release. ‘’A Quiet Place 2’’ has been taken off of the schedule indefinitely, as has ‘’The New Mutants’’, a Marvel title that has already experienced a number of scheduling moves, and it will endure another now.

Two additional films that have been pulled will have serious scheduling ramifications. The next ‘’Fast and the Furious 9’’ has been moved all the way to next spring. This is a movie franchise that has a truly global appeal, and to try to shoehorn it into a date later this year would rob it of the huge international take. (These titles routinely draw over $1 billion worldwide, so there is business to be lost.) This changes the franchise a bit, as ‘’FF-10’’ was tentatively set to come out in 2021.

An even more problematic scheduling change involves Disney/Marvel’s ‘’Black Widow’’. This is not just a matter of finding a slot somewhere on the calendar once normalcy returns to the marketplace. The Marvel Cinematic Universe has become an entwined enterprise over the years, with a cascading storyline that involves numerous properties, and only more so lately. The emergence of the Disney Plus streaming service involved a multi-year schedule of titles which would all be interconnected. Depending on how long the market impact lasts this can affect a wide assortment of titles over a series of platforms, leading to a scheduling nightmare for Disney.

Streaming, of course, is looking to be the outlet where the entertainment consuming public is bound to turn when they become billeted at home in growing numbers. With a mounting number of services coming online in the coming months it becomes a golden opportunity for them to gain notice with a captive audience. This means the shakeout of where audience preferences will rest is going to become a compressed event. The expected months of experimentation and sampling could actually now play out in a matter of weeks, and we can see just which streaming options become favored possibly as soon as this summer.

One remaining old school option for entertainment could see a resurgence of sorts in this business climate. Considering that ‘’social distancing’’ is the new buzzword for cultural gatherings it will be interesting to see if the drive-in movie experiences growth as a result. There are still approximately 300 drive-ins operating in North America, and as this need to separate is in pace with the warming weather the car-situated movie experience could be a viable option for many.

Interesting to see if this viral contagion leads to a growth in both the newest form of media consumption, as well as one of the oldest.