Joe Biden Hilariously Gets Caught Reading a Script During an 'Interview'

Interviews are supposed to be unscripted, raw moments where the person being interviewed is put on the spot and made to answer tough questions. You don’t typically see someone focused on notes during these settings because that’s akin to cheating. There’s a reason notes and earpieces aren’t allowed at debates. If a person can’t be trusted to speak off the top of their head about core issues, what is the point of their candidacy?

Of course, Joe Biden has been seen using notes during “interviews” numerous times, oftentimes with him intently looking off-camera when he’s supposed to be focused on the interviewer.

And while that’s become the norm for him, Biden has apparently graduated from general notes to just reading a straight script with laid out instructions included. He got caught doing so yesterday.

The first that came to my mind when I saw this was the scene from Anchor Man where Ron Burgundy starts just mindlessly reading off the teleprompter because he’s incapable of understanding what he’s actually saying. 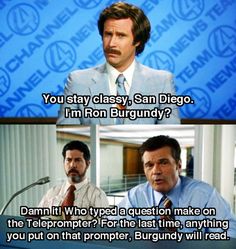 Biden isn’t even processing the words that are coming out of his mouth in this interview. He’s just blindly reading and doing a bad job of it at that. It’s getting more and more clear that he’s a puppet for his handlers, which includes his incredibly ambitious wife, who has done more interviews than he has in the last several months. Go take a look at who is on his campaign team and you’ll see a smattering of Bernie Sanders alums as well. Biden isn’t in control of his faculties and he’s not in control of his campaign.

This is exactly why he won’t take questions from anyone. Once again this week, Biden gave a short speech and was hurried off the stage like a nuclear missile is inbound. He won’t do tough interviews either, choosing only to sit down with total hacks and doing these local hits where he can just read his script because the campaign controls the terms so stringently.

But this guy wants to be president? I’m not confident he can remember what day it is on a regular basis, much less make life and death decisions at a moment’s notice. This is why the choice of Kamala Harris as VP raised the stakes even more for the election. She will be the de facto leader of the country and it’s not even really debatable at this point. Things are so bad that Biden had Harris deliver the pre-rebuttal to Trump’s RNC speech. You don’t do that unless you are incapable of doing it yourself as the candidate.

The only real question is whether Biden could even make it through a full term or if Harris would become the official president much sooner. That’s if they win, though, and right now, Trump is closing the gap. Let’s hope the trends continue, for all our sakes.