Tom Hanks' Wife Took Chloroquine, Fully Recovered, and Is Now Complaining About the Side Effects 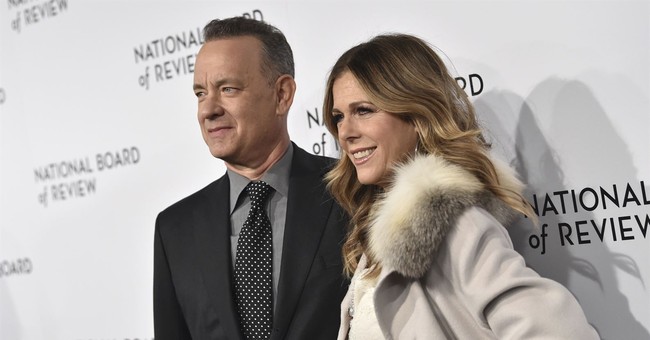 Rita Wilson, wife of Tom Hanks, has been the subject of several mainstream media articles over the last few days. Namely, she’s been complaining about the side effects she suffered after taking chloroquine while she was attempting to recover from her Wuhan virus infection.

What were those side effects? Nausea and dizziness.

Rita Wilson took chloroquine to fight COVID-19 and didn't like what it did to her https://t.co/ZhxDIh0AAp

You’d think she’d like having her life possibly saved in the process, but I guess not.

Rita Wilson doesn’t know if chloroquine helped her in her COVID-19 fight. She only knows how it made her feel on her road to recovery.

In short? Not good.

“I don’t know if the drug worked or if it was just time for the fever to break,” Wilson said Tuesday, noting the “extreme side effects” she experienced.

Wilson, who came down with COVID-19 while in Australia with husband Tom Hanks, told “CBS This Morning” that the medication left her “completely nauseous” and suffering from vertigo. She was given the drug about Day 9 of her illness, she said.

“I could not walk and my muscles felt very weak,” the newly minted “Hip Hop Hooray” rapper continued. “I think people have to be very considerate about that drug. We don’t really know if it’s helpful in this case.”

While it’s true that we don’t know for sure what caused her turn around, the fact trail says she was getting progressively worse until she took the drug. Chalking her recovery up to coincidence seems a bit presumptive on her part, at least as presumptive as stating the drug helped.

Regardless, her complaints about side effects seem rather silly. Many, many drugs have the side effects she describes but provide the greater good of helping with a more serious illness. Heck, you can’t take a pain reliever on an empty stomach without getting nauseous. That’s not a reason to cast doubt on the drug itself. As someone who’s traveled overseas many times and been prescribed malaria medication, you are often told to start it before leaving precisely because it can make you sick for a period.

But let’s be real. This article and the others like it are not really about sympathy for Wilson’s side effects. They are simply meant to cast aspersions on a drug that the President dared to offer some hope with. It’s also a drug that’s shown promise throughout the world. The standard that’s attempting to be set, where chloroquine and hydroxychloroquine must have no side effects, nor ever cause harm to anyone, is ludicrous. That’s not a standard that exists with almost any other medication. There will always be people who react badly to certain drugs. The question remains whether it’s effective overall.

The over arching point here is this – Listen to your doctor, not the media and not left-wing celebrities looking to push a narrative.

If you are sick, do what your doctor tells you to do. It’s really that simple. All these outlets attempting influence public opinion for partisan reasons regarding whether to take or not to take possible treatments are acting incredibly irresponsibly. Let the professionals do their work.