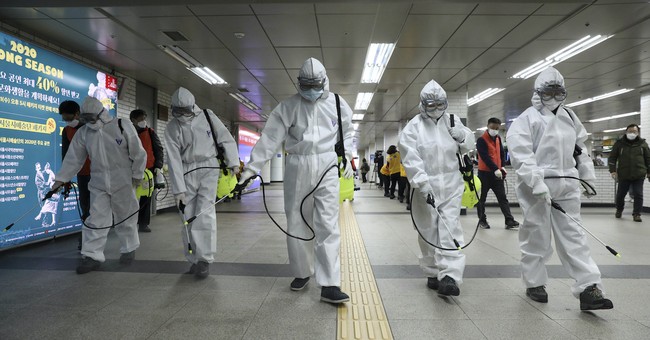 Workers wearing protective gears disinfect as a precaution against the new coronavirus at the subway station in Seoul, South Korea, Wednesday, March 11, 2020. (Kim Sun-woong/Newsis via AP)

John Hayward is no stranger to epic Twitter threads.

For his latest entry, he takes a look at the media complex and how it’s profiting both monetarily and politically by purposely inciting panic. That’s been a point of frustration for many Americans the last few weeks as news outlets we are supposed to be able to trust focus on the most ridiculous things instead of providing fair coverage and relevant information during the current Wuhan coronavirus pandemic.

Video of my question to @realDonaldTrump today on his administration's disbanding of the White House team responsible for coordinating responses to pandemics.

He called my question nasty & said he knew nothing about it.

I call it a relevant, fair, and truth-seeking question. https://t.co/ncYwqZ0Xtp

a minute's worth of footage of trump and health-care execs fondling the same mic and touching each other. reassuring presser, overall! pic.twitter.com/T3Zjw0IXqB

This is BIZARRE. Just a roll call of Big Important American Businesses.

The press conference that’s beingminimized in the above tweets was about two hours long, included long stretches of experts talking, and a solid hour of questions. If something important was left out, it’s because the media spent their time trying to ask marginal gotcha questions instead of things that can help people. By any objective standard, Trump and his team did a great job this afternoon of laying out exactly what will happen next. But the media are incapable of acting like adults, instead focusing on the most pointless, trivial matters while they simultaneously promote panic and hysteria.

Hayward dives into that. Here’s his comments.

How many doomsayers and hysterics have ever been completely discredited by their predictions failing to come true? Not well-meant warnings that were a bit off, but misses on the scale of the "population bomb" scare. Has a fashionable hysteric gone out of business since the 70s?

Modern society has a weird passive-aggressive combination of lethargy and frenzy that provides the perfect environment for doomsayers. You have to predict outrageously magnified disasters to get people to care, and once they start caring, they become obsessively focused.

Of course there are political predators lying in wait to take advantage of the frenzy, like the Democrats who tried to stuff abortion junk into the coronavirus emergency bill. Their whole agenda revolves around catching panic waves and surfing to greater power on them.

Social media unquestionably made the media worse by giving it a bottomless well of hysteria to dip into whenever it needs a quick fix. It's absolutely insane how much of "news" coverage is now shaped by 280-character messages, often composed on cell phones.

The lesson modern media takes from the Boy Who Cried Wolf is not that crying wolf is wrong. It's that the Boy should have cried louder, monetized his crying, demanded more funding for the Department of Wolf Control, and gotten himself on a few Rolodexes as a wolf expert. /end

His point about media personalities trying to play doomsday prophet is one the nose. We’ve seen crazy projections of millions dying, even as reality shows the spread slowing in places like China and South Korea, with the latter currently having under 100 deaths. In the end, after these people are proven wrong, there will be no reckoning. They won’t be held to account. No, they’ll be right back to the next partisan attack, no matter how insane it may be. They’ll continue to cry wolf, polishing their credentials, because they are never called on for their litany of false proclamations.

That’s the sad reality of our current legacy media. They are a bloated, self-important bunch who care more about pushing narratives that doing what’s right. The worst part? It’s not going to change anytime soon.