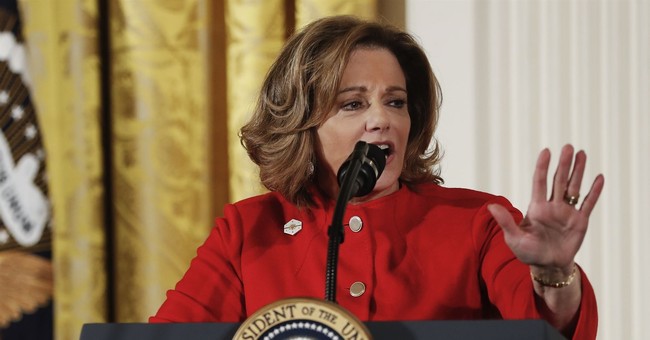 FILE – In this March 29, 2017, file photo, Deputy National Security Adviser K.T. McFarland speaks at the Women’s Empowerment Panel, at the White House in Washington. President Donald Trump said Feb. 2, 2018, that McFarland had withdrawn from consideration to be ambassador to Singapore, expressing his “disappointment.” He said McFarland served his administration “with distinction” and said Democrats “chose to play politics rather than move forward with a qualified nominee for a critically important post.” (AP Photo/Pablo Martinez Monsivais, File)

RedState is live at CPAC and we’ll be putting out various articles throughout the day sharing what speakers are saying, interviews, and general impressions.

The big event today is Vice President Mike Pence speaking a little later, but K.T. McFarland also just spoke and shared more details about her treatment at the hands of Robert Mueller’s investigation. There’s been a lot of secrecy surrounding exactly how his team conducted itself so it’s very interesting to get a first-hand account of just how out of line they were.

Here’s some of what she said.

McFarland was first approached by the FBI before the Mueller investigation started, being told that they likely wouldn’t need to speak to her again. A month later, she was called in for another interview and that started a whirlwind experience for her that she says left her traumatized.

McFarland would go on to describe being asked about snippets of emails and documents, in which they would refuse to show her so she could be certain what she was responding to. At one point, an investigator told her “that’s not really how this works.” The implication being that they were trying to trap her into misspeaking so they charge her with a crime.

Eventually, she sat down directly with Mueller’s team directly. McFarland said she was pressured to plead guilty, having been threatened with the fact that Mueller’s team felt she had lied to them. She described being so fearful that she told her lawyers she would say whatever they wanted her to say to make them stop. Obviously, she reconsidered, as that never happened.

After it became clear she was not going to tell Mueller what he wanted to hear, they said they weren’t going to charge her with anything (and if they had one ounce of evidence to do so, there’s no question they would have). It had all been one big pressure play.

In her closing, McFarland described the narrative that she felt Mueller’s team wanted her to give. Namely, that Donald Trump had given her a direct order to have Michael Flynn call the Russians during the transition. This would have formed the basis of a “Russian collusion” play.

Regardless of what one may feel about McFarland, her job performance, etc., her treatment at the hands of Mueller’s investigation is a testament just how rabidly they were trying to take down Donald Trump. They were mining ever corner, putting on pressure plays, and trying to get people to paint a narrative they wanted about the Trump campaign. This is not how our justice system should work. If someone who can afford the most expensive lawyers and who held a major position in the government can be subject to this, imagine what happens to the average person every day?

We need reform of our investigative and prosecutorial processes so this kind of stuff stops. Unelected bureaucrats shouldn’t hold this kind of power over people’s lives.