Drink It If Ya Got It: Iranian 'Prophetic Medicine Healer' Prescribes Camel Urine to Treat the Wuhan Flu 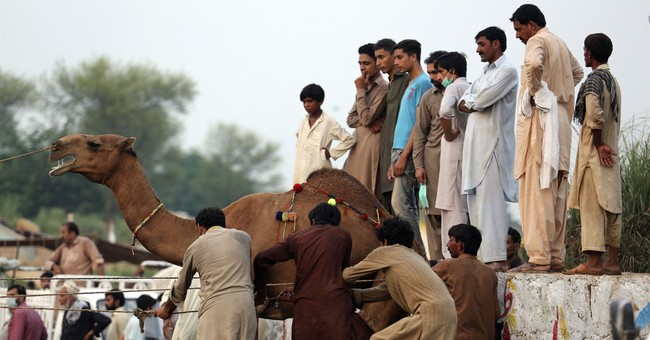 People struggle to load a camel they bought for the upcoming Muslim festival Eid al-Adha in a truck, in Islamabad, Pakistan, Monday, Aug. 20, 2018. Eid al-Adha, or Feast of Sacrifice, is the most important Islamic holiday and marks the willingness of the Prophet Ibrahim (Abraham to Christians and Jews) to sacrifice his son. (AP Photo/B.K. Bangash)

Have you contracted the coronavirus? Or heck, have you been out of breath? If so, boy, has a Middle Eastern man got a treatment for you.

If you’re looking for a remedy to your respiratory blues — as per a tweet by Alireza Nader — “pro-regime religious ‘expert'” Mehdi Sabili’s got you covered.

No need for a doctor visit — all you’ve gotta do is find a well-hydrated desert-dwelling even-toed ungulate.

According to Alireza’s tweet, a video featuring Mehdi tells those suffering from COVID-19 or other respiratory issues to treat their malady with good ol’ camel urine.

And Mehdi walks the talk — he proves it in the video.

But he’s not the only AltMed game in town.

Since the coronavirus outbreak in Iran in February Islamic medicine men have come up with several highly unusual remedies for COVID-19 including inserting a cotton ball dipped in violet oil in one’s anus and less outrageous remedies such as dropping bitter watermelon (Citrullus colocynthis) oil in ears and nose.

In January another such “doctor” caused public outrage by burning a copy of Harrison’s Manual of Medicine which is widely taught in Iranian medical universities and claiming that “Islamic medicine” has made such book irrelevant.

Some Iranians believe in the virtues of traditional Iranian medicine which is different from the Islamic medicine.

But — and sadly — there appears to be some controversy over slurping (fresh, warm) animal waste to calm your virus woes. And believe it or not, guzzling matter from the bladder of camels has some viral history.

As reported by U.S. News & World Reports in 2015, amid cases of MERS (Middle East Respiratory Syndrome) — which was purportedly passed in some fashion by camels — the World Health Organization urged that “food hygiene practices should be observed. People should avoid drinking raw camel milk or camel urine, or eating meat that has not been properly cooked.”

The WHO hasn’t been batting 1,000 lately but, presuming the same directive applies in 2020, personally, I’m prepared to lend credence and just have water with my spaghetti.

Although, concerning MERS — which is, incidentally, a coronavirus (MERS-CoV) — the CDC pointed out, “No epidemiologic evidence supports transmission associated with camel urine or meat.”

Back to Mehdi’s recommendation, (don’t) trust him — he’s not a (western) doctor.

Still, as stated by USNews.com:

I think I speak for most Americans when I say we’ll give it a go the traditional route first. If hydroxychloroquine fails, and other treatments bolstered by the Scientific Method fall short, well, there’s always a camel somewhere.

But for now, personally, if COVID-19 strikes, my preferred health regimen doesn’t include respiratory therapee.