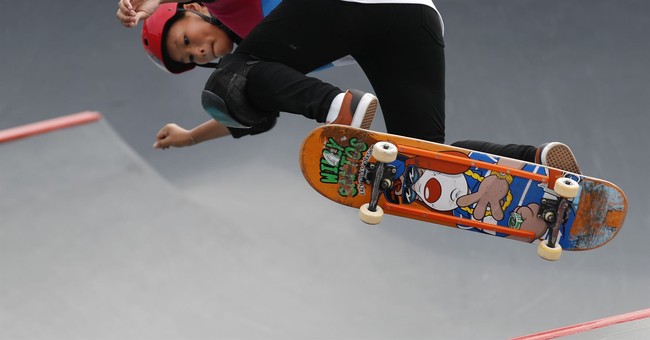 It’s been said there’s a fine line between protecting the public from itself and tyranny.

And to what degree should we be protected us from ourselves, anyway?

As you might have heard, California likes to err on the side of extra protection.

In the town of San Clemente recently, cool skateboarders weren’t staying quarantined — they were hitting up the local skatepark to grind it and catch some rad air.

But the Powers That Bemoan weren’t much for it — social distancing and all.

Apparently, amid the pandemic, governmental groaners had forgotten the decades-old iconic cry of ‘boarders all over:

Skate or Die is one of our favourite games, here it is on a C64 tape! Remember this @EA ? #retrogaming #c64 #skateboarding pic.twitter.com/trAa0HAbFc

Did you skate or die? Never played skate or die much as a kid. Quite honestly, I didn’t realize there was a sequel until I started collecting. Any fans out there? #skateboarding #retrogaming #retrogames #nes #8bit #oldschoolgaming pic.twitter.com/mnJqPuE8hF

So officials decided to give the skaters a bit of What For — you think you can play around in this town? Kick sand.

The government dropped 37 thousand tons of granular, mellow-harshing material onto the park.

It was a gnarly sight:

San Clemente had shut down all its parks and facilities on April 1 under the state’s stay-at-home orders, but skaters ignored signs warning against trespassing at the Ralphs Skate Court, 241 Avenida La Pata. Since park facilities have been closed city officials say they routinely saw people visit the skatepark, even by some children accompanied with their parents, according to the San Clemente Times. City officials told the newspaper they followed in the footsteps of other cities, and filled the skatepark with 37 tons of sand.

And there was this:

The nonprofit group that has raised money to support the skatepark…says the city made the decision to fill the skatepark with sand without notifying them first.

It’s a sad state of things.

But hey — they didn’t sand the rail:

Some other suits took a cue from San Clemente and filled LA’s famed Venice Beach skate park, too.

By Friday afternoon, the ramps and bowls at the park located at 1800 Ocean Front Walk were buried beneath enough sand to make them unrideable. All parks, beaches, bike paths and trails in Los Angeles County are closed until at least May 15 to support social distancing under the county’s Safer at Home order.

That, my friends, is disconcerting indeed.

And let me add: Venice Beach was already crawling with things surely worse than the coronavirus. So why close now?

And a buncha people thought it was crap:

Ted Cruz saw it as an object lesson:

Clearly, the greatest public- heath threat imaginable…a kid on a skateboard. Young people, remember, this is what Big-government statist Democrats do—they take away your freedom. https://t.co/VBCmnZRvfC

Some us have been warning about inevitable government overreach and abuse of power all along. Now we have city officials not just shutting down parks- idiotic in itself- but actually going the extra mile to make them unusable for all.

The Daily Wire’s Matt Walsh made an interesting point:

Yeah, great idea. Obviously we don't want the kids outside, in the sun, in the fresh air. We want them inside having prolonged indoor contact with their older family members. https://t.co/7UEuwF4ixp

This is some petty, tyrannical bullshit right here. https://t.co/flHEUV3ZMj

Adequately done, but I think everyone missed the most obvious conclusion, given the topic: