Frenching Felon: A Lady's Arrested for Contaminating Nearly $2K Worth of Store Items With Her Tongue 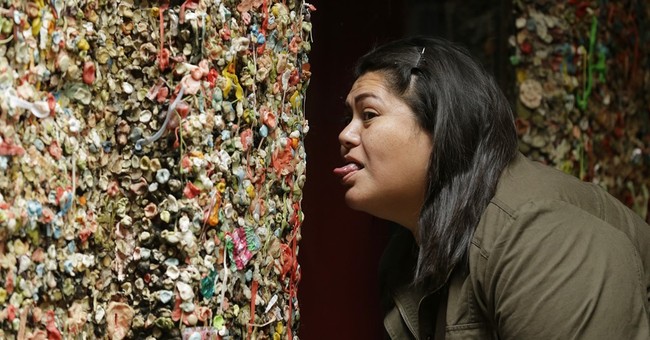 Louise Kaiwi, who was visiting Seattle from Hawaii, pretends to lick a wall full of gum as she poses for a photo taken by a friend at Seattle’s famous gum wall at Pike Place Market, Monday, Nov. 9, 2015. On Tuesday, a steam-cleaning process to remove all of the gum is from the walls is scheduled to begin, the first full cleaning the quirky tourist attraction has received in 20 years. (AP Photo/Ted S. Warren)

I often ask myself a question you might’ve pondered a time or two yourself: What is wrong with people?

Here’s one more reason to inquire.

A woman in Northern California’s been arrested for allegedly messing up nearly $1,800 worth of Safeway items — including jewelry and groceries.

In this coronavirus culture, her contamination course of choice: slathering her tongue all over them.

As reported by The Los Angeles Times, employees phoned the cops after watching the amorous lady pick up “numerous pieces of jewelry” and give ’em some lickin’ love.

She loaded her cart with around 1800 bucks’ worth of goodies, and one worker told police the merchandise was “deemed unsellable due to the cross-contamination.”

Hey, what’s the big deal? Whenever I’m in Zales and jonesin’ for bling, you can bet I’m not pulling out my Mastercard for that watch, ring, necklace or bracelet ’til I’ve gained the most essential of information: How’s it taste?

The 53-year-old was arrested for felony vandalism.

Why do all these stories as of late involve grown men and women? With my coverage, I’m inadvertently putting together a Slobber Series:

There was the 27-year-old who licked deodorant in Walmart and was charged with terrorism.

Then we had the detained 50-year-old accused of intentionally coughed on a supermarket staffer — before telling her was COVID-positive.

Plus the 48-year-old doctor who was put in cuffs for hugging and coughing on nurses.

And let’s not forget the 21-year-old (technically an adult) who licked a public toilet multiple times and then purportedly contracted the virus.

There was also this, as described by the New York Post:

Jeffrey Smith, 46, was snoozing at a Fort Worth laundromat Monday when a woman confronted him and asked him to leave, police said Tuesday.

One more, courtesy of The Daily Wire:

[A] Mexican government health official, Dr. Daniel López Regalado, visited a hospital in Oaxaca de Juarez, Oaxaca and tested positive for the coronavirus. He reportedly acted callously toward hospital staff for not giving him preferential treatment and apparently coughed and spit on them. Regalado has reportedly been fired and charged with risk of infection.

So that’s what we’re dealing with.

Back to Jennifer in Cali, in addition to licking the jewelry, as stated by Fox News, “She also allegedly licked her fingers before taking groceries off the shelves.”

The frenching fruitcake was installed into the El Dorado County Jail for felony vandalism. Bail was set at $10,000.

Oh — and she was unable to pay for her items.

Say it with me, everyone: What is wrong with people?