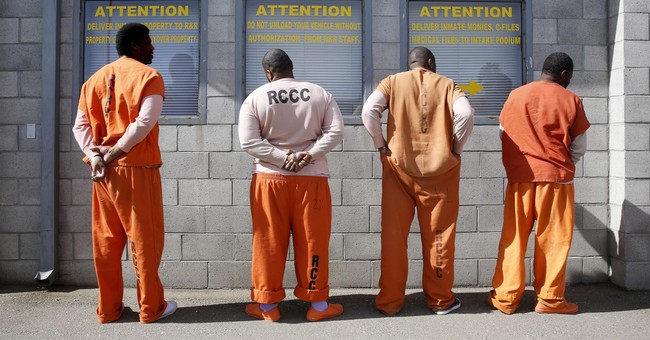 FILE – In this Feb. 20, 2014, file photo, prisoners from Sacramento County await processing after arriving at the Deuel Vocational Institution in Tracy, Calif. California will reconsider life sentences for thousands of nonviolent third-strike criminals by allowing them to seek parole under a ballot measure approved by voters two years ago. Court documents obtained by the Associated Press on Thursday, Oct. 18, 2018 show Gov. Jerry Brown’s administration will include the repeat offenders in Proposition 57’s early release program. (AP Photo/Rich Pedroncelli, file)

Amid the pandemic, do we need to release prisoners?

As reported by Buffalo’s Channel 4, as part of a statewide effort, 50 prisoners were released in Monroe County, New York.

Of those half-hundred offenders, eight were of the sex kind:

Eight registered sex offenders have been released from the Monroe County Jail as part of a statewide order coming from The Department of Corrections and Community Services– or DOCCS.

Oh — and if you’re in Greece, NY, don’t go to the Holiday Inn Express:

Nine of those inmates are now staying at the Holiday Inn Express in Greece.

It’d be a heck of a family vacay, huh?

So why the release? Well, because of the ol’ Wuhan flu:

The inmates were moved to the Holiday Inn Express after the DOCCS was ordered to release low-level technical parole violators, amid concerns that COVID-19 has spread in local prisons.

Greece Chief of Police Patrick Phelan’s not too fond of the notion:

The prisoners, according to WIVB, are considered “low-level technical parole violators.”

Still, Patrick’s not a fan:

“So you have a violent criminal who’s done time in state prison who’s been given the chance of parole, and not followed the conditions of their parole. That’s who you’re talking about right now.”

And if the system’s gonna dump prisoners en masse into the general population, the police chief would appreciate some advance notice.

But he got nada:

“We weren’t told by anyone. I think good practice would be if you’re going to release convicted felons. Some of them very violent some of those level 3 sex offenders, You might want to give law enforcement the heads up.”

DOCCS told News 8 it decided who to release based on the underlying technical violation, not the original crime.”

The Department of Corrections issued a statement:

This significant action is being taken in response to a growing number of COVID-19 cases in local jails over the past few days and weeks. Our top priority remains the public health and safety of New Yorkers during this global public health emergency and this measure will further protect a vulnerable population from contracting and transmitting this infectious disease.

As I covered last week, the Big Apple’s on the ball, too.

Mayor Bill de Blasio announced on March 24th that he’d be letting out around 300 prisoners from Rikers Island (here).

He hadn’t made up his mind as to whether sex criminals would be eligible for an upcoming emancipation:

“Although we’ll continue to look at cases individually, I’m not comfortable releasing those individuals at this point.”

So there ya go.

I know some of you are deeply concerned about the microscopic enemy lurking near and far, ready to infect your lungs.

Hopefully, it makes you feel just a little better, knowing all those criminals are runnin’ around.

And there’s a chance they weren’t even infected by the virus before they were unleashed.

Horror: An Elderly Woman Was Struck and Died Due to Alleged Hysteria Over Social Distancing