No Makeup, No Auto-Tune: Here's a Roundup of Celebrity In-the-Raw Isolation Videos for Your Pandemic Pleasure 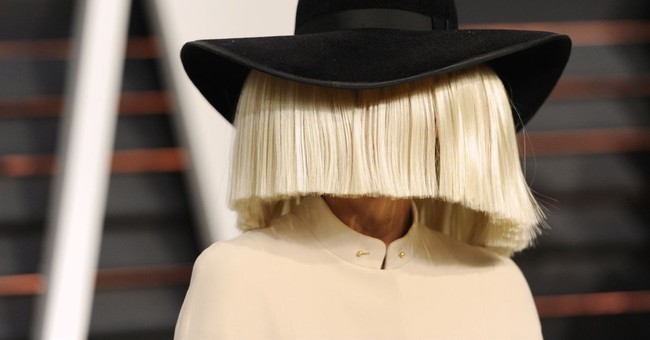 FILE – In this Feb. 22, 2015, file photo, Sia arrives at the 2015 Vanity Fair Oscar Party in Beverly Hills, Calif. Sia tweeted a nude photo of herself on Nov. 6, 2017, after learning that someone was trying to sell nude paparazzi photos of her. (Photo by Evan Agostini/Invision/AP, File)

The world’s staying home right now, and that includes the people who sing, dance, and stand on X’s and convincingly recite words they were told.

But some in entertainment are still trying to bring us the goods, via music, humor, a productive message, or just some element of being interesting.

Here’s a rundown of a few offerings making their way across the pandemic’d net.

Some in showbiz are encouraging everyone to isolate, like the great, seemingly-normal Kevin Bacon. He’s participating in the #IStayHomeFor campaign, supporting domestic quarantine for those we love. Kevin’s person to protect: his wife, actress Kyra Sedgwick.

#IStayHomeFor @kikkosedg! Hey everybody, it’s now so important to stay home and keep our distance from others if you are able. It’s one way we can help prevent the spread of #Coronavirus and save lives. The more of us who can, make it safer for those who can’t. So if you’re home too like me, post a video or photo with a sign like mine, telling who you are staying home for and ask 6 friends to do the same. Post it with the hashtag #IStayHomeFor so I can see and share. The more folks involved, the merrier – We’re all connected by various degrees (Trust me, I know!) I’m kicking it off with @jimmyfallon @eltonjohn @Brandicarlile @kevinhart4real @ddlovato @davidbeckham – but I encourage YOU ALL to join in too! Let’s use this 6 Degree thing to do some good! . . . . #Corona #Coronavirus #StayHome #StaySafe #6Degrees #ThinkingOfYou #SpreadTheWord

Saved by the Bell star Mario Lopez — backed up by Mark Wahlberg — wants people to stay fit while they’re stuck inside:

Check out our full body workout that you can do right in your living room. NO EQUIPMENT needed! Only 45 minutes.. Keep the distance & spread the love pic.twitter.com/2TvIPqaYEo

And if that doesn’t do it for ya, you can just watch Slater and the fam dance:

Comedic icon Steve Martin’s helping out, courtesy of a fantastic banjo performance in the woods. I love this guy:

One tweeter liked it so much, she decided to accompany the wild and crazy guy with her fiddle:

I accompanied your song with my violin. I hope you see this and retweet it. I tried to make it look like we're in the same woods with green screen. I hope that's creepy! I'm a huge fan!! 🙂 pic.twitter.com/wAgAIRM38a

Oasis frontman Liam Gallagher took to his kitchen sink to sing a song about washing your hands:

The incomparable Terry Crews did the same, and I gotta say, his wins by a mile:

terry crews hand sanitizing to the sound of i will survive was all i needed to see pic.twitter.com/lLTuMUZyLT

Speaking of cleaning your claws, I don’t think you can get any better than Neil Diamond’s new song:

Jimmy Fallon and his daughters got in on the hand-washing act, too:

Singer Lizzo took to the webisphere with a strange half-hour combination of flute and mantra, including the observation that “the earth is not happy. … The earth is vibrating lower than it should be.” She wants to fix that: “Now I want you to imagine that you’re taking that fear off of the earth. Like a quick-change. It’s a wig.”

A meditation and mantra to promote healing during this global crisis. Use at your own pace. Love you!

It hit one user right where they live:

“That was so beautiful and exactly what I needed! Thank you.”

British singer-songwriter (and GLOW actress) Kate Nash blew it, too — in her case, “Enter Sandman.” On the recorder:

Speaking of the UK, singer Robbie Williams thought everybody might like a cover of “Uptown Funk.” Ever wonder what a 77-million-albums-selling singer sounds like when he’s just in a room dishin’ it out?

Two Short Pomes For Twitter . Love pomes. ( btw stay safe. keep distance, wash yr hands and look — get on FaceTime or Skype- makes all the difference to those you love) pic.twitter.com/BDDgozz0su

More on that “dishin'” thing, “Boom Clap” music star Charli XCX was beltin’ it out at home while she took care of business:

So did UK singer Perrie Edwards and her soccer star boyfriend, Alex Oxlade-Chamberlain:

perrie edwards and alex oxlade
-chamberlain dancing to say so by doja cat; an appreciation tweet@LittleMix

Madonna gifted the world an alternate version of “Vogue.”

Again, ever wonder how music’s biggest stars sound when they’re just singing in a room like you do? Listen and learn:

As we round the last corner here, country singer Brad Paisley performed in concert from his house, and he even managed to finagle socially-distanced duets with stars Carrie Underwood and Tim McGraw:

And I’ve saved the best for last. The wonderful Keith Urban treated us to songs from his studio, and the country crooner — accompanied by wife Nicole Kidman — paid a moving tribute to the late Kenny Rogers (as well as to legendary songwriter Don Schlitz):

So there’s a wrap-up for ya on this isolated Sunday. What are your impressions?

I did keep one small bonus in my hip pocket. Props to terrific actress Michelle Pfeiffer, who used a simple photo to thank society’s real VIPs — doctors and nurses. They bravely do their jobs so that we may be well.

Michelle made her own T-shirt as a show of support. Way to go, Catwoman:

So many need to be acknowledged for waging this war for us. Today I am wearing a t-shirt I made to honor the #NURSES & #DOCTORS on the front lines.🙏 Make a t-shirt and join us in honoring our heroes who are not able to shelter in place. I challenge @portiaderossi because she needs to take a break from cooking 😜#covid_19 #NYC #weareallone. Instructions to make your shirt are on @daquan Instagram page. ❤️ #blessthenursesanddoctors Thank you @rona_pfeiffer for nominating me!

A post shared by Michelle Pfeiffer (@michellepfeifferofficial) on Mar 26, 2020 at 9:41am PDT