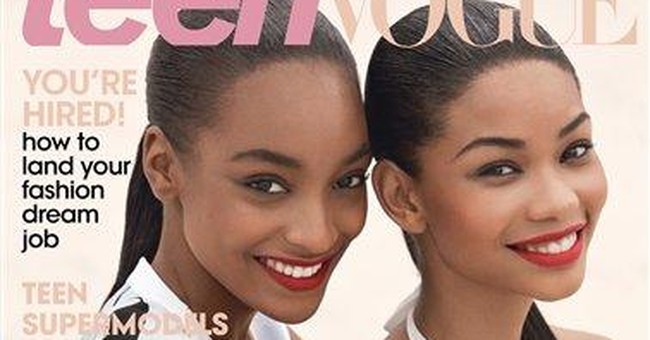 In this magazine cover image released by Teen Vogue, teen models Jourdan, left, and Chanel are shown on the cover of the November 2009 issue of Teen Vogue. (AP Photo/Teen Vogue)

Teen magazines sure have changed.

Amid our current quarantine, the National Center on Sexual Exploitation is accusing teenybopper titan Teen Vogue — as well as phone app Snapchat — of encouraging “child pornography.”

They’ve got a bone to pick, and here’s why…

Teen Vogue delivers news and video content to youngsters via the Discover feature of Snapchat, which — according to Statista — boasted 218 million daily active users for the last quarter of 2019.

As reported by The Daily Caller, on Monday, the adolescent outlet offered the following:

Like anything worth doing, sexting takes practice. Here are 7 things you might not have known about sexting.

“Sexting should make you feel good,” it said.

Another recent instruction to young skulls full of mush:

Sending someone details about what you want to do to them and getting back even more detail about what they want to do to you should be fun, easy, and ultimately joyful. Anything less than that isn’t worth your time.

Here’s one from Saturday:

If you’re in the early stages of your romance, you can still forge an emotional bond with your new boo by texting and Facetime. There are all kinds of creative, fun ways to sext, if you’re at that level.

NCOSE has responded to the series on its website:

[I]n the midst of the COVID-19 pandemic, Teen Vogue (which has a troubling history with teenagers and sexual exploitation) posted a Snapchat Discover story about sexting under the guise of helping teenagers sustain their relationships from a distance.

Encouraging teens to sext is encouraging minors to create and distribute child pornography, which is more accurately referred to as child sex abuse material (CSAM).

Encouraging teens to sext is encouraging minors to create and distribute child sex abuse material (CSAM). Also, online predators use social media to pose as peers and groom kids to “sext” w/them and then distribute the material and blackmail them with it.https://t.co/MRx3bgSOJW

Also, online predators use social media platforms to pose as peers and groom children to send them sexually explicit material (i.e. “sext” with them) that they can then distribute and/or use to blackmail the child into other forms of sexual exploitation.

And due to the pandemic — NCOSE asserts — young people are at greater risk than usual:

Content promoting and encouraging this dangerous and illegal behavior isn’t okay in any context, but it is particularly troubling in a time when the FBI is warning parents that children are at increased risk of online sexual exploitation while they are stuck at home during COVID-19 school closures.

Research shows that sexting is often linked to offline sexual coercion. Additionally, sexting and the sending of sexually explicit material via social media apps can lead teens to be sexually extorted, abused, and even trafficked. In this time of uncertainty, when kids will likely find themselves online more frequently, predators are poised to capitalize on increased opportunities to target young adolescents. Research also suggests that young adolescents who practice sexting experience other harmful effects including feelings of terror, stress, difficulty concentrating, and isolation.

The organization issues a call for Teen Vogue and Snapchat to stop and retract the material:

The actions of Teen Vogue and Snapchat are not without consequence and we are calling on Teen Vogue to retract this dangerous content and to replace it with a responsible admonition about the dangers of sexting and online sexual exploitation. Also, Snapchat, we are calling on you to stop allowing third parties to host such content on your platform.

It’s certainly not the first time Teen Vogue’s been called out for encouraging the nation’s youth to engage in sexual behavior.

It seems to me that only an absolute idiot would tell very young girls it’d be “fun” to send images of their naked bodies to the phones of others (which is presumably what Facetime would involve and likely what sexting would as well). Furthermore, to a degree which a teenager surely can’t fathom, what you put out there…is out there forever. Or may be.

As I said, teen magazines sure have changed:

Yes, she was…
Annette Funicello on the cover of the January, 1961 issue of Young & Beautiful magazine. pic.twitter.com/sWn6khwWac

Show biz 1960: Datebook magazine features Annette Funicello and Fabian on a date at the beach. pic.twitter.com/bfJ3W4db4S

Kate Beckinsale Recalls a Harrowing Harvey Experience – How Was This the Same Man Hollywood Loved? (Video)