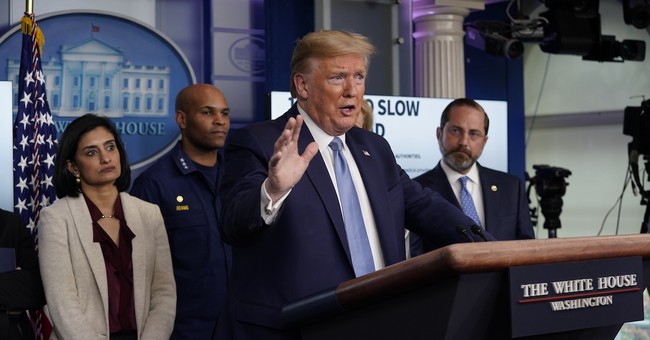 On Thursday, the Trump campaign made a request to Twitter. It asked the social platform to place a “Manipulated Media” tag on a video edited to make Trump look as if he’d called the coronavirus a “hoax.”

The clip’s been viewed millions of times.

The Daily Wire notes that the same audio was employed by a Joe Biden ad, which The Washington Post’s fact checkers awarded Four Pinnochios.

As reported by The Hill, this is what the Prez actually said:

“Coronavirus. They’re politicizing it. We did one of the great jobs, you say, ‘How’s President Trump doing?’ ‘Oh, nothing, nothing.’ They have no clue, they don’t have any clue. … And this is their new hoax. But you know we did something that’s been pretty amazing.”

The full quote shows Trump is criticizing Democratic talking points and the media’s coverage of his administration’s response to coronavirus. He never says that the virus itself is a hoax, and although the Biden camp included the word “their,” the edit does not make clear to whom or what Trump is referring.

Here’s a surprise — Twitter declined to side with Trump.

The campaign flagged the video Wednesday, but the Bluebird claimed it didn’t violate its policy.

“Our site integrity team has reviewed against the Synthetic and Manipulated Media Policy and determined it does not qualify for a label at this time.”

“This is indisputable evidence that Twitter has one rule for the Trump campaign and another rule for Democrats. Twitter refused to apply its manipulated media label to a Biden campaign video that the Washington Post Fact Checker gave 4 Pinocchios for deceptive editing, and now Twitter is refusing to label a viral video that doctors audio of President Trump to spread misinformation about the coronavirus. Twitter’s political bias is obvious and it is actively choosing to protect Joe Biden.”

Meanwhile, Twitter recently laid out its new rules for “safety,” which outlaws any language which “dehumanizes on the basis of age” (here).

And here’s a bit of juxtaposition: Last month, the site allegedly suspended a guy for typing two words (here):

Everyone please demand @Twitter @TwitterSafety #FreeZuby. He was suspended for saying "Ok dude"

He was replying to a person who told him she sleeps with more women than @ZubyMusic does.

"Ok dude" is literally all he said. In common vernacular "dude" is used to refer to anybody. pic.twitter.com/92ICzLFGwZ

“Has Melania even thought about doing something with her be best sh– during these times? I see regular a– awesome people on my timeline all day doing all they can to make people happy, and this wifebot is working on whatever the f— a tennis gazebo is.

“I expect Donald to be a do nothing f—–g loser wimp, but she could maybe possibly try to uhhh BE BETTER possibly the best be the best the best be best.

“ALL I have seen this bot do is gently touch Christmas ornaments in a cape and stare in a cape and pat statues in a different cape and then change her cape into a rude a– jacket. F— you.”

Chrissy’s posts are still standing (and, to be clear, I believe they should be).

Personally, having seen various things allowed and deleted, I can’t quite understand how the rules work.

In my opinion, outside of something objective — like a no-nudity rule, for example — it would be better for social media to be an open forum, free from a committee’s sensibilities regarding what can be expressed and what can’t, what should be labeled and what shouldn’t.

But that’s just me.

What do you think of all this?

I look forward to finding out in the Comments section.

U.S. Surgeon General: There’s Something We Can All Do Right Now to Help Those in Need and Maybe Save Lives