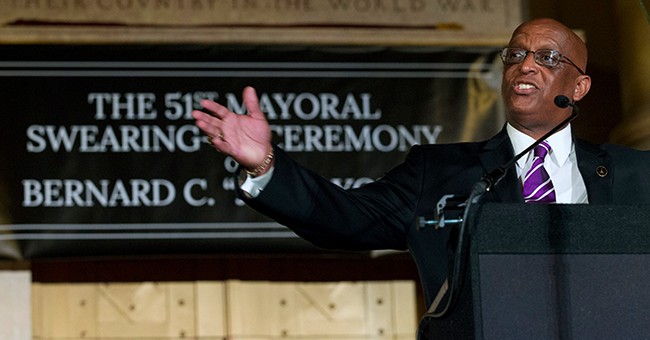 Baltimore Mayor Bernard “Jack” Young speaks to the crowd after being sworn into office during a ceremony at War Memorial Building in Baltimore, Thursday, May 9, 2019. Former Mayor Catherine Pugh resigned under pressure, amid a flurry of investigations into whether she arranged bulk sales of her self-published children’s books to disguise hundreds of thousands of dollars in kickbacks. (AP Photo/Jose Luis Magana)

On Wednesday, the mayor of Baltimore asked criminals to have a heart.

Mayor Jack Young pleaded with the citizenry: Stop shooting each other so hospital beds will be available for COVID-19 victims.

Also Wednesday, as per The Baltimore Sun, a fifth person in the city was confirmed to have contracted the virus.

According to CBS Baltimore, Jack told residents the level of recent violence is unacceptable:

“I want to reiterate how completely unacceptable the level of violence is that we have seen recently. We will not stand for mass shootings and an increase in crime. For those of you who want to continue to shoot and kill people of this city, we’re not going to tolerate it. We’re going to come after you and we’re going to get you.”

“[W]e cannot clog up our hospitals and their beds with people that are being shot senselessly because we’re going to need those beds for people infected with the coronavirus. And it could be your mother, your grandmother or one of your relatives. So take that into consideration.”

So don’t try to kill people because…it could kill people. But not those people you were trying to kill; some other people.

The city certainly has a disturbing propensity for violence, and there was a terrible incident just Tuesday in the Madison Park neighborhood.

Police said an officer confronted a man with a rifle Tuesday night after he allegedly shot seven people. … The suspect had a rifle and was dressed in all black with a ski mask. The officer who was patrolling the microzone confronted the man after he fired into a crowd gathered at the corner of Eutaw and McMchen Streets around 6:27 p.m.

As explained by Police Commissioner Michael Harrison, the crime was come upon thanks to routine patrolling:

Police said an officer confronted a man with a rifle Tuesday night after he allegedly shot seven people. … The suspect had a rifle and was dressed in all black with a ski mask. The officer who was patrolling the microzone confronted the man after he fired into a crowd gathered at the corner of Eutaw and McMchen Streets around 6:27 p.m.

The Daily Wire points out that two men were also killed Monday afternoon in separate incidents.

There’s a ton of that going ’round: Baltimore’s crime rate is 145% higher than the national average.

According to AreaVibes.com, B-Town’s violent crime is 382% higher than the average in the U.S.

As for the coronavirus, the state’s seen 85 cases so far. 81 are still active.

Someone spread those stats to the felonious figures of Baltimore — maybe they’ll stop shooting people as a courtesy.

In Honor of CoronaPanic, an Arcade Replaces Its Claw Machine’s Goodies With Nothing but White Gold

A Woman Finds Out Her Husband’s Barber Shop Is Men-Only, So She Reports It to the Local News: ‘You Can’t Treat People That Way’