People Are Calling 911 Because They're out of Toilet Paper, So One Police Department Provides a History of Alternatives 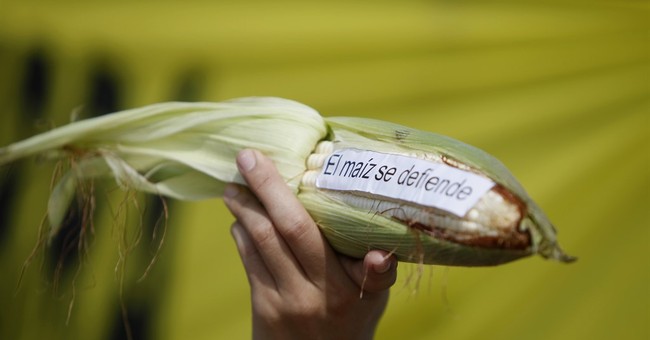 FILE – In this June 25, 2009 file photo, a Greenpeace activist holds a corn cob bearing a sign that reads in Spanish “Defend corn” at a protest against U.S. imports of corn and genetically modified seeds outside Los Pinos presidential residence in Mexico City. NAFTA critics in Mexico see a silver lining to renegotiating the trade deal with a Donald Trump administration, saying they would like to see protections put in place for Mexican corn, beans, rice and sugar against U.S. exports and that the deal has hurt workers, farmers, unions and the environment. (AP Photo/Eduardo Verdugo, File)

Like when someone’s hurt. Or there’s a fire. Or a crime’s been committed.

But lately, people are dialing those desperate digits over something that should be a crime, but isn’t: an absence of toilet paper.

Call it a Code Red.

Or a different color.

The calls have become so frequent, Oregon’s Newport Police Department has asked people to stop dooing it.

That wasn’t a typo.

“It’s hard to believe that we even have to post this. Do not call 9-1-1 just because you ran out of toilet paper. You will survive without our assistance.”

I shudder to think what their “assistance” would be.

The cops go on to offer some good ol’ DIY ways to solve your most disheartening of problems.

Here’s a bit of an education (hopefully, you’re not a visual reader):

In fact, history offers many other options for you in your time of need if you cannot find a roll of your favorite soft, ultra plush two-ply citrus scented tissue.

Mayans used corn cobs. Colonial Americans also used the core of the cob. Farmers not only used corn cobs, but used pages from the Farmers Almanac. Many Americans took advantage of the numerous pages torn from free catalogs such as Sears and Roebuck.

And if you’re in the Holiday Spirit:

The Sears Christmas catalog, four times thicker than the normal catalog, could get a family of three wiped clean from December through Valentine’s Day; or Saint Patrick’s Day if they were frugal.

Then, of course, there are always alternatives to toilet paper. Grocery receipts, newspaper, cloth rags, lace, cotton balls, and that empty toilet paper roll sitting on the holder right now.

Or how about going au naturel:

Plus, there are a variety of leaves you can safely use. Mother Earth News magazine will even tell you how to make your own wipes using fifteen different leaves. When all else fails, you have magazine pages. Start saving those catalogs you get in the mail that you usually toss into the recycle bin. Be resourceful. Be patient.

The post ends with a bit of philosophy, and the words you never, ever want to hear:

There is a TP shortage. This too shall pass. Just don’t call 9-1-1. We cannot bring you toilet paper.

So how long will Oregonians be desperate to make a clean sweep? As of Monday, the state boasted 47 cases of COVID-19.

In Lincoln County — home of Newport — no cases had been reported.

For the messed up folks there, as they wait for problems (and food) to pass, I offer a soundtrack for their troubles:

Unbelievable: A Brutal Fight Erupts Between a Hockey Coach and the Referee – at a Children’s Game (Video)

What Were Democrats Thinking With Their Latest Decision on 2024?
Townhall
Former Mumford and Sons banjoist Winston Marshall wants everyone to know he retracted his apology
Twitchy
Buttigieg's Excuse for Why More Americans Don't Appreciate Biden's 'Accomplishments' Is Just Too Funny
Redstate
Hot Air: No Global Warming for Eight Years
PJ Media