An 8-Year-Old Enters a Raffle at a Youth Hockey Game, Wins $200 Worth of Marijuana 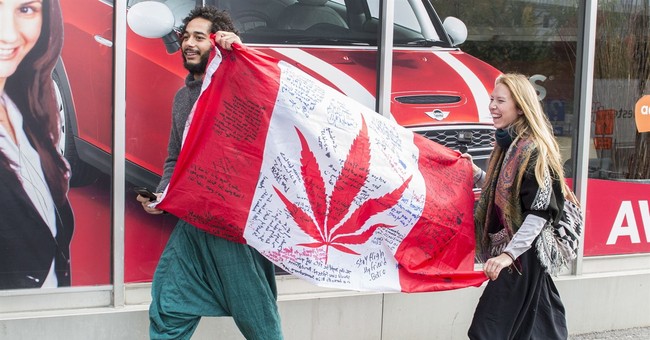 People hold up a Canadian flag with a marijuana logo on it outside a government cannabis store in Montreal, Wednesday, Oct. 17, 2018. Canada became the largest country with a legal national marijuana marketplace as sales began early Wednesday. (Graham Hughes/The Canadian Press via AP)

In Canada, a kid hit the jackPot.

And his grandfather is mad as heck over the 8-year-old’s leafy luck.

The tyke won a raffle during a youth hockey tournament recently, and the booty was full of bhang — that’s marijuana, for those of you not in the know.

“Each team is usually responsible for putting a gift basket or prize package together with a minimum value of $50. And then what they do is they have a big setup and they have a paper bag taped in front of each of these prizes.”

The prizes, Redl said, are usually geared towards children. Redl’s grandson had put in his tickets in a particular bag.

The kid’s family was soon given the great big fat(ty) good news — he won, and it was no measly $50 deal.

As Keith put it:

The boy’s dad took a photo of the weedy win:

Pot luck! Canadian boy, 8, wins $200 worth of cannabis products at a hockey tournament by bidding on a picture that he thought showed chocolate and fondue

Keith Redl shared that his grandson was playing … pic.twitter.com/gZHJkNeuTK

What a righteous haul for a second grader. I’m sure his parents thought it was dope.

“My grandson thought he won a great prize. ’Dad, I won chocolate!’ ‘No, son, there’s bad drugs in the chocolate.’ How do you explain that to a kid?”

The Dawson Creek Minor Hockey Association has since insisted that the prizes were meant for adults (is THC a bullseye gift for any given of-age Canadian?).

Recently at a hockey tournament run by our club, there was a raffle to raise money for minor hockey. Amongst a number of prizes donated were two baskets of cannabis products. The products did not appear on the donation table, only a photo and list of the items contained in the basket.

The raffle winners were told the basket contained cannabis products and was given the option of not accepting the prize. The winners chose to take the prizes, their identification was checked to ensure they were of legal age, and the donor took them outside the event to deliver the basket.

Keith isn’t impressed, and the fact that he was a cop for 32 years likely helps less than none.

He called the whole thing “ridiculous.”

“There is no place for drugs at a child’s hockey tournament.”

Going forward, the league will be keeping to an update:

The concerns brought forth are appreciated by DCMHA and we are currently updating our policies to ensure that going forward our charitable events are in keeping with our policies and government policies.

There will be no further comments or statements made at this time.

In case you were wondering, the ticket only cost $10.

Whatever you think of the controversy, you have to admit: The little kid’s sizable score was a great bong-for-the-buck.

A Chinese Woman Was Arrested at the Delhi Airport for Smuggling Gold – and Not in Her Suitcase, but It Rhymes With That

45-Year-Old Convicted Sex Offender Protests to the Judge: He Identifies as an 8-Year-Old Girl