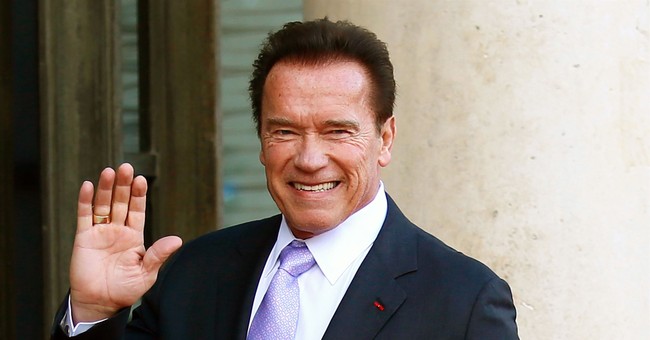 FILE – In this Dec. 12, 2017 file photo, Arnold Schwarzenegger waves as he arrives at the Elysee Palace prior to a meeting on climate change in Paris. Schwarzenegger is recovering in a Los Angeles hospital after undergoing heart surgery. He had a scheduled procedure to replace a pulmonic valve on Thursday, March 29, 2018, according to Schwarzenegger’s spokesman. He is in stable condition. (AP Photo/Francois Mori, File)

My, the world has changed.

We’re supposed to stay inside, only use the drive through, and — apparently — cuddle up with our toilet paper at night.

Personally, I gave mine flowers yesterday. Just to let it know how I feel.

And not only that: Arnold Schwarzenegger — the Hollywood giant who once drove a Hummer and for years encouraged aspiring non-girlymen to eat tons of steak and eggs — is now “99% vegan.”

Was there a Total Recall on the guy from the 80’s?

The Last Action Hero is telling everyone to stay in, too, like he does — he, being a man in his 70’s at home with his donkey and tiny horse.

On Sunday, Arnie tweeted a video of coronavirus advice to his 4.4 million followers, and the clip’s racked up a whoppin’ 10.4 million views and over 75,000 shares.

Stay at home as much as possible. Listen to the experts, ignore the morons (foreheads). We will get through this together. pic.twitter.com/FRg41QehuB

Here’s what the Terminator suggests:

“Stay at home as much as possible. Listen to the experts, ignore the morons. We will get through this together.”

Such was his recommendation, while he did as Tinseltown icons do: He fed carrots to Lulu, his donkey, and his mini-horse Whiskey.

[His next project: The Beverly Hillbilly?]

“See, the important thing is you stay at home, because there is a curfew now. Nobody is allowed out, especially someone that is like 72 years old. After you’re 65, you’re not allowed out of the house any way in California. So we eat at home.”

The 2-Term-inator also took time for some baby talk to his four-legged friends:

Gosh, I wish Hee-Haw was still on. Boy, have I got a guest-star pitch.

Conan the Barbarian ain’t the on-the-town guy he used to be:

“See that’s what we do, we don’t go out, we don’t go to restaurants, we don’t do anything like that anymore here. We just eat with Whiskey and with Lulu. We have a good time. We get entertained — look at that beautiful smile she has. … No more restaurants, okay? Forget all that. Public gatherings, restaurants, and all those gymnasiums — out the window. We stay home.”

Cue some sweet affection with the girls.

Honestly, stayin’ at the ‘stead may not be a bad idea for Arnold.

The U.S. Needs To Change Course Right Now in Ukraine
Townhall
J.K. Rowling goes off on the 'genderists' and 'pedophilia apologists' and it's a beautiful thing
Twitchy
Oops, Electric Vehicles Are Exploding After Water Damage from Hurricane Ian
Redstate
Canada's Dilemma
PJ Media