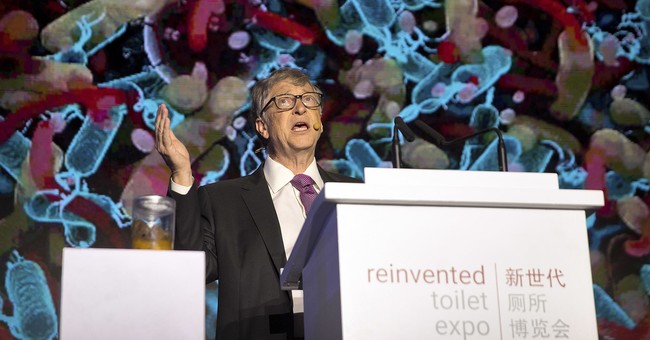 Bill Gates, former Microsoft CEO and co-founder of the Bill and Melinda Gates Foundation, speaks as a jar of human feces sits on a podium at the Reinvented Toilet Expo in Beijing, Tuesday, Nov. 6, 2018. With a jar of human feces on a podium next to him, billionaire philanthropist Bill Gates has kicked off a “Reinvented Toilet” Expo in China. Gates said Tuesday that the technologies on display at the three-day expo in Beijing represent the most significant advances in sanitation in nearly 200 years. (AP Photo/Mark Schiefelbein)

Thanks in large part to the media, coronapanic is in full swing.

Need toilet paper? Check out the corn section of your local farmer’s market.

Things many Americans take for granted are skyrocketing in value as they plummet in availability.

And someone’s always there to capitalize on an emergency.

Such was the case recently for an enterprising 13-year-old in the UK.

Oliver Cooper decided he’d like some extra money for snacks.

Thus, he took a container of hand sanitizer to school.

As explained on Facebook by his mom, Jenny Tompkins, the teen was caught charging 50p (about 60 cents) per squirt.

32-year-old Jenny posted a photo of the lad, captioned by the following:

Despite the TP shortage, Mom’s sitting at home with a big capitalist turd:

“Well the little turd has just been expelled from school for the day after being caught charging students 50p a squirt for hand sanitiser to protect themselves from the bloody coronavirus.”

Apparently, Dad had a different take:

“Very hard to discipline this behaviour when his dad phones him from work to call him a f***ing legend.”

According to a post update, Oliver made 9 pounds (just over $11) before being given the heave-ho.

“You should have returned the money or forced him to donate it to charity.”

“Disgusting when older people need it. Should be ashamed of him. If he thinks it’s good to sell it, maybe he should have given to the elderly. Can’t believe you are proud of him.”

But a whole lot are:

“He was just being an entrepreneur. Tell him next time to just keep it on the down-low or sell full bottles.”

“Free Enterprise. Good on him.”

“This is exactly the sort of thing my boy would do, and I would be very proud too…”

“If I had a kid that was doing this, I’d be pleased and proud that he’s helping other kids stay protected.”

“The school should look at his drive and enthusiasm as their success. And the price was competitive, too.”

“One day he’ll be a millionaire.”

“Give this kid a medal.”

The guy’s definitely got ideas.

Oh — and in case you were wondering, as per the Mirror, his parents let him keep the money:

The teenager had so far spent some of his earnings on a multipack of Doritos and was saving the rest to treat himself to a kebab later.

Ice Ice ByeBye – A Hockey Match Turns Into a Brutal Old-School Fistfight, Complete with a KO and Hospitalization (Video)

Woman Is Dumped by Fiancé for Being ‘Too Fat.’ She Loses Weight and Becomes Miss Great Britain