Hilarious: A Man Has His Personalized Tag of 27 Years Revoked, But He's Determined to Snatch It Back 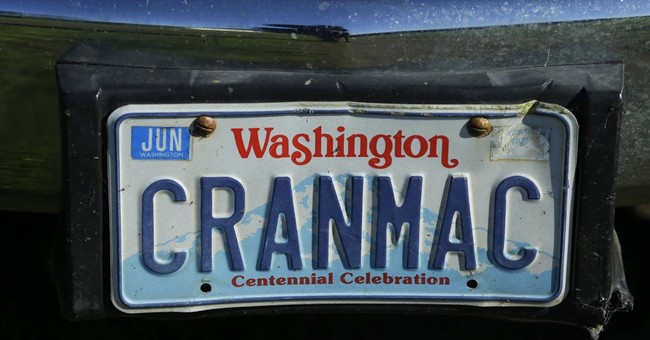 In this Oct. 11, 2016 photo, a custom license plate bears the name of the cranberry farm owned by Malcolm and Ardell McPhail in Ilwaco, Wash. This year’s estimated crop of about 170,000 barrels (8,500 tons) of cranberries puts the apple-giant state fifth in the U.S. behind Wisconsin and Massachusetts, the two states that produce the bulk of the crop. (AP Photo/Ted S. Warren)

The Nova Scotia man had the same personalized license plate for 27 years.

But in 2016, suddenly, his trademark tag was taken away.

And why? ‘Cause a citizen complained.

He went to court over the snatch, and the case went all the way to the highest court.

In January, the Nova Scotia Supreme Court ruled license plates are not “public spaces” with a history of free expression and that this particular plate was recalled because it could be interpreted as a socially unacceptable statement without the benefit of further context, which it does not provide.

So what’d the tag say? Something ominous like “U R NEXT”?

Or a creation as clever as these:

if you drive an infinity and your license plate is "n byond" then you're doing it right 👏 pic.twitter.com/uTTv17IWnn

Perhaps best of all, how ’bout one like this:

Lorne’s set to appeal the decision, because his plate is merely a display of pride.

He’s just a guy trying to represent his family. His ancestry.

Three generations of Grabher men have driven around Nova Scotia with a personalised licence plate bearing their surname. Now a furious Lorne Grabher is taking his battle to retain it to the province’s highest court https://t.co/V29W5QD1Mb

He told the court last April:

“Growing up, I mean when you have a unique name like that and you’re the only one around, our parents always instilled in us, always be proud of who you are, because if your dignity is taken away from you, what else have you got?”

Grabher and his attorneys have demanded the license plate be reinstated, claiming the decision was “discriminatory,” “unreasonable” and a violation of free expression.

Indeed, Judge Darlene Jamieson wasn’t a fan. She torched the tag in her decision:

“The primary function of a license plate is not expression but is identification and regulation of vehicle ownership. A license plate by its very nature is a private government space.”

“Preventing harm that could flow from such a message on a government plate must be seen as pressing and substantial. … The plate was recalled because the seven letters ‘GRABHER’ could be interpreted as a socially unacceptable statement (grab her), without the benefit of further context indicating this was Mr. Grabher’s surname.”

Lorne’s being represented in the appeal by the Justice Centre for Constitutional Freedoms. On Monday, the firm articulated its position thusly:

“[The plate is] an expression of the Grabher’s family pride over three generations, reflecting their German-Austrian roots and heritage.”

Furthermore, as per attorney Jay Cameron:

“There was no evidence that anyone, including the anonymous complainant, had suffered any harm as a result of the plate. There is no evidence that censoring Mr. Grabher’s name after 27 years of use on a license plate makes anyone safer.”

Good luck to Mr. Grabher. I hope he seizes a victory from Lady Justice.

But here’s a piece of advice…

Lorne — if you get the plate back, don’t put it on any of these models:

A Man Whose Farts Kill Mosquitoes Claims Companies Are Working to Bottle His Gas as Insect Repellent [Correction: Satire]