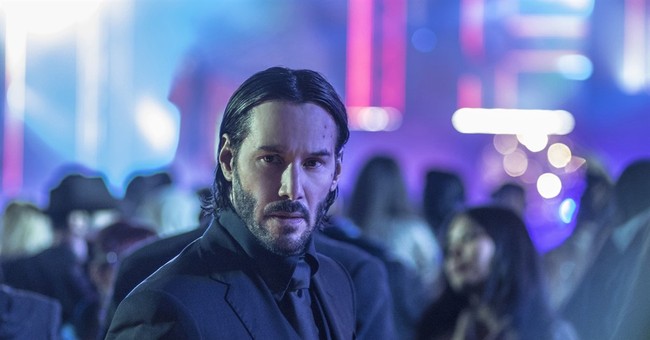 This image released by Lionsgate shows Keanu Reeves in a scene from, “John Wick: Chapter 2.” (Niko Tavernise/Lionsgate via AP)

Now more than ever, it seems, we have people telling us how to be.

How to live. What to think. How to act.

Social media is full of outrage and cancellation, and people on different sides of politics aren’t even speaking to one another.

But I came upon something recently which struck me as the finest online example of rudimentary, rightful living I’ve seen in quite a while.

And it emanated from perhaps the unlikeliest of places.

The simple illustration of virtue — of what, in my estimation, this world so desperately needs — came courtesy of Hollywood.

Or of one very peculiar 5-star member of Tinseltown, who lives as if he’s never heard of the place: Keanu Reeves.

Back in 2011, the actor was doing something few if any in his position would ever do.

While so many others were busy virtue-signaling, babbling from their bubble, or doing their best Marie Antoinette, Keanu was…riding the subway.

Watch him, and watch what he does.

Putting others before ourselves.

In his case, being a gentleman.

What Keanu does in the video was once the norm.

But it isn’t anymore, in many places across America.

Least of all so-called celebrities.

But Keanu is different. He’s not surrounded by bodyguards and handlers. He’s not there to get attention.

And when the next group gets on, there’s a lady without a seat.

So he gives up his.

It’s not deserving of an award, but it certainly deserves respect. And a nod, as something of which the world critically needs more.

It isn’t the first time the John Wick star’s gotten attention for being a nice, humble guy — last March, his flight from San Francisco to Burbank had to make an emergency landing.

So what did he do? Charter a jet? Hire a helicopter?

He waited at the airport with his fellow passengers, helping sort out how they might make it on to LA.

In the end, the man opted for a two-hour old-school trek with his new pals.

On the long drive, Keanu read facts about Bakersfield aloud and played country music for the group.

One passenger documented their experience:

What a nice, normal person.

If only that could be said of more of us.

The uglies in politics.

Keanu is a breath of fresh air.

But don’t get it twisted — the dude can shoot the fool out of everything around him:

Speaking of, if you like action and haven’t seen John Wick 3, correct your error at once.

And why not? It’s a great thing to support projects led by nice people.

That’s something every project should be — in a country once ruled by the Golden one.

Hopefully, it can be again.

Horticultural Horror: The Art World Loses a Masterpiece as a Gallery Patron Grabs the $120,000 Banana and Eats It

Man Punches Cop in the Face, Doesn’t Realize the Officer’s Partner is a German Shepherd. He’ll Be Lucky if the Dog Ever Lets Go