William Shatner's Divorce is Final, and Captain Kirk Walks Away With 'All Horse Semen' 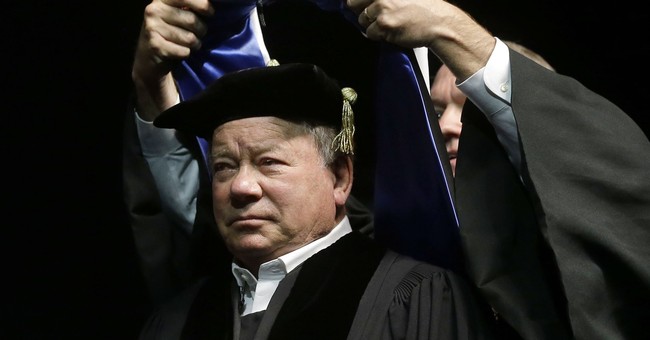 Actor William Shatner, left, stands as an academic hood is placed on him by New England Institute of Technology Senior Vice President and Provost Douglas Sherman, right, Sunday, May 6, 2018, during the school’s commencement, in Providence, R.I. Shatner was presented with an honorary doctor of humane letters degree during the ceremonies. (AP Photo/Steven Senne)

William Shatner’s divorce settlement is boldly going where — I hope — no man has gone before.

The Star Trek stud and his ex-wife, Elizabeth Martin, went splitsville in December after 18 years of wedded bliss. Or, at least, of being married.

And according to court records, the two reached an agreement this week.

I know what you’re thinking — forget the houses, cars, investments, savings, and jewelry; who gets the horse semen?

Trekkies will be pleased as punch to know that James T. himself is walking away the victor.

According to reports, Shatner and Martin split up their four horses, with the actor scoring Renaissance Man’s Medici and Powder River Shirley, while Martin will get Belle Reve’s So Photogenic and Pebbles.

Along with his two horses, Shatner was awarded horse breeding equipment and “all horse semen,” reports said.

Right — ya gotta go for all. Let those less expensive lawyers compromise; the big boys play for keeps.

And Bill has some experience in the fight — he was formerly hitched to Nerine Kidd, Marcy Lafferty, and Gloria Rand.

No word on who got any equine reproductive goods in those settlements.

In the proceedings this go-round, TV’s T.J. Hooker did lose a Versailles, Kentucky home to his erstwhile missus. That’s where they raised and trained American saddlebreds.

Well, she may have gotten the land and the (country) air, but he got the semen.