A California Couple Fight Crime with a High-Powered Sprinkler, and the Result is Hilarious (Video) 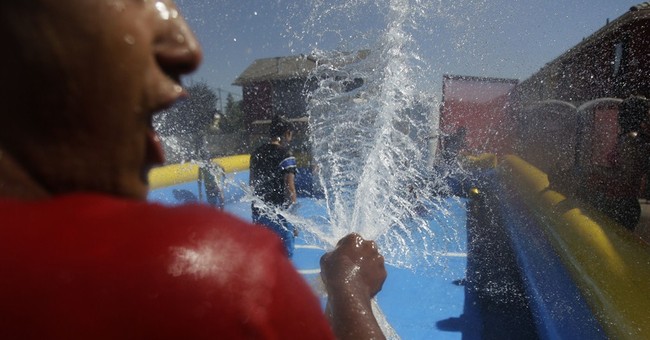 In this Jan. 25, 2015 photo, a youth sprays his friends with a water hose in an inflatable pool set up by the local municipality in a public plaza in Santiago, Chile. Parents are relieved the city set up the inflatable pools during this summer’s heat wave so they no longer have to explain that they don’t have the time or money to go to the beach in one of the most economically unequal countries in the world. (AP Photo/Luis Hidalgo)

Sometimes, it doesn’t take much to water down crime.

As the conventional wisdom goes, criminals are opportunists — make yourself and your things a difficult to reach, and they’ll look elsewhere.

Such appears to have been the case in California recently, in the city of Porterville.

As reported by Fox News, thieves were coming into Katie Cemarena’s neighborhood to “try and steal tools out of vehicles,” plus “anything else they [could] get their hands on.”

A lot of times in such a case, motion-sensored lighting is all you need. But for Katie and her husband Josh, that hadn’t quite done the job.

So they got an idea, which she shared on Facebook:

“Our flood light didn’t seem to scare them off, so we decided to have a little fun with a motion-activated sprinkler that has an impressive amount of pressure.”

The couple went on Amazon and ordered a sprinkler that packs an impressive punch.

They hooked it up and let their security camera wait for the show.

Last Tuesday, a fly got stuck in the web.

The video is hilarious.

A masked, hooded, wouldbe robber approaches the truck on their bike…

The blast of water looks to hit them right in the head.

The opportunist ducks, then gets the heck out of Dodge.

It’s a good reminder — sometimes it just takes a little ingenuity to outsmart the bad guy.

“Feel free to share the video if you, or someone you know is having the same problem!”