It's the Greatest Thing You'll See All the Rest of February: Tom Steyer Dances Onstage to a 90's Hip Hop Hind-Quarters Hit 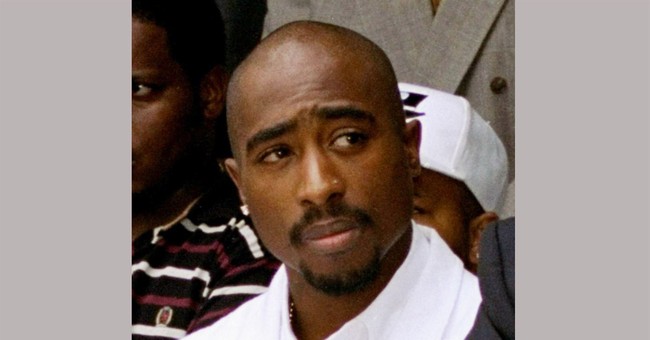 FILE – In this Aug. 15, 1996, file photo, rapper Tupac Shakur attends a voter registration event in South Central Los Angeles. Items owned by Shakur have been donated to Temple University, including a bullet-dented golden medallion the rapper was wearing in 1994 when he was shot five times. Diane Turner, the collection’s curator, said Thursday, Nov. 1, 2018, that the Blockson Collection will increase its focus on hip-hop culture with the addition of Shakur’s items. (AP Photo/Frank Wiese, File)

In the words of KISS, “You Wanted the Best, You Got the Best.”

Or something some degree of less.

Maybe his are the right hands to hold the fate of the free world; but a question has loomed: “Can he work it on the dance floor?”

Well, no more sleepless night for you.

As the hedge-fund maestro sits between 12 and 16 percent — trailing behind Joe Biden — it might do him some good to shake what he’s sitting on and trail that behind around the room.

At a campaign event the night before South Carolina’s vote, Tom took to the stage with rapper Juvenile — I guess for the benefit of aaaaaall the young folk.

Juvenile launched into his 1999 hit…

If you were about to walk away from this story, better Back That…well, you know.

For my money, the best shaker goin’ there is Tom’s wife, Kat Taylor. Was she a Fly Girl on In Living Color?

And was this also from the same night?–

As per The Daily Wire, not only did Tom send a message of “I don’t think you’re ready for this jelly,” but the bootylicious candidate fed everyone. In addition to doing the mashed potato, he served some:

Steyer also splashed some cash.  Attendees at the event were treated to a full appetizer spread, complete with mashed potato bar, [the Daily Mail] reported. Much of the crowd stayed around for three hours to see Juvenile, who gave Steyer his official endorsement when he was surrounded by reporters backstage. “He’s been representing my people from day one,” the rapper told The Mail.

Come November, are you ready for his jelly?

Why in the Blue Blazes Would a Liberal Rock Star Praise Trump for Honoring Red State Rush Limbaugh? Is This Real?

Like a Sock to the Eye: Makers of the Romper for Men Drop a Bomb on Your Frolicking Fancy